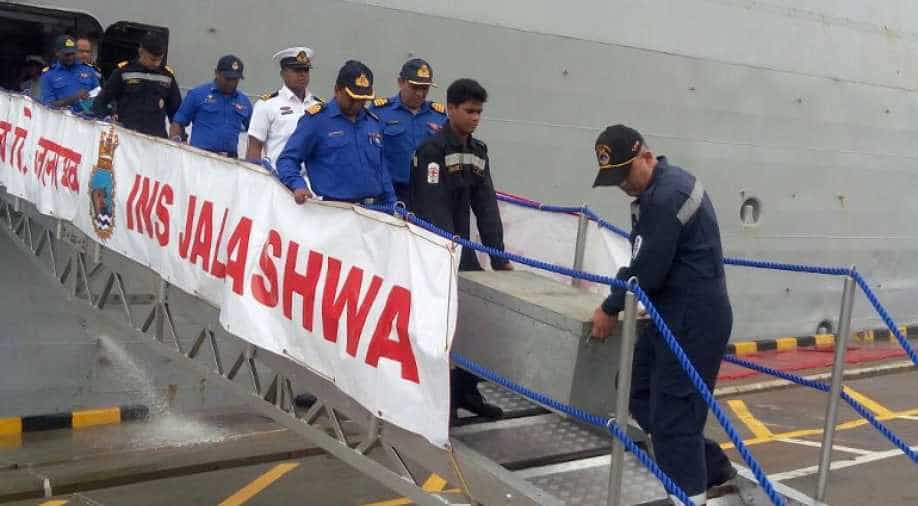 The Indian Navy has joined rescue operations in Sri Lanka and Bangladesh.

Indian Navy diving and medical teams joined rescue efforts of Sri Lankan authorities in flood-hit regions as the death toll in the country's worst torrential rains since 2003 climbed today to 193.

The Indian contingent of more than 300 navy personnel was assisting in the relief, with divers searching the brackish waters and medical teams seeing patients in makeshift tents set up at shelters.

INS Shardul has nearly 200 personnel on board, including specialised rescue, diving and medical teams, as well as a large amount of relief material and Gemini inflatable boats.

"Secy to President of SL and SL Navy chief receiving symbolically the relief material on board the 3rd relief and rescue ship INS Jalashwa," the High Commission of India in Colombo tweeted.

The disaster is described as one of the worst-ever calamities since the 2003 floods.

The official death toll was at 193, with another 94 people listed as missing, the Colombo Gazette reported.

18 people have been rescued till now and the operation is still in progress.

The people trapped had been blown away from shore and coastal dwelling units due to Cyclone Mora.

The severe cyclonic storm MORA over northeast and adjoining east central Bay of Bengal moved further north-northeastward with a speed of 28 kmph, and lay centred at 0230 hrs IST yesterday.

The Indian Navy on Monday had said that it has kept its Eastern Fleet ships at the highest level of readiness to render assistance to Bangladesh if required.