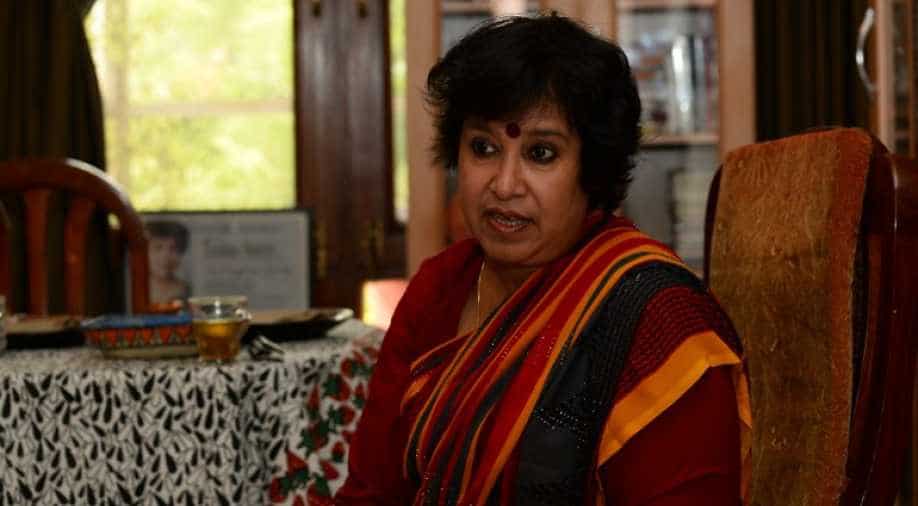 Bangladeshi writer Taslima Nasreen, an advocate of women rights and a vehement critic of religious fundamentalism has been facing death threats for a long time. Photograph:( AFP )

On the last day of Zee Jaipur Literature Festival, the biggest literature festival in the world, there was a surprise speaker.

Taslima Nasreen, the Bangladeshi writer in exile was in conversation with Salil Tripathi. Nasreen, an advocate of women rights and a vehement critic of religious fundamentalism has long been facing death threats. There is also a fatwa against her. Her presence, therefore, was kept under careful wraps by the organisers of the festival. Nobody knew of this surprise session till Sanjoy K Roy, producer of Zee JLF announced it just before the commencement.

However, the conspicuous presence of the police force in and around the venue was a tell-tale sign of something unusual in the offing.

Speaking at the front lawns, Nasreen expressed her support for Uniform Civil Code in India, her homeland since 1994. She said that the Uniform Civil Code(UCC) was urgently needed for empowering people whose freedoms are denied due to religious dogma. Nasreen rejected terms like “nationalism” and religious fundamentalism saying, “I believe in one world. I believe in rights, freedom, humanism and rationalism.” She said that in order to progress the Muslim society needs to take valid criticism in its stride.  “Whenever I criticise, people want to kill me," she rued.

Nasreen shared her experiences with both the Hindu and the Muslim fanatics. She recalled the 2007 fatwa against her and criticised the West Bengal government for not practicing true secularism. “Hindu and Muslim fanatics have equally attacked me, but they were never punished," she said.

Speaking on the UCC, Nasreen said, “Everyone has a right to believe in their religion and I respect it. The problem is that the state and the society respect the right to believe in a religion, but not the right to not believe in one. The state must not be religious. All laws must be based on equality and justice," she said. She noted how all religions were misogynistic in nature, denying equality to women.

Speaking on violence faced by secular writers in Bangladesh and elsewhere Nasreen said, "Why are secular writers being forced to leave the country or murdered, while religious fanatics are sheltered."

A little later, speaking to WION Sadaf Saaz, a Bangladeshi writer, shared how the resurgence of identity politics in Bangladesh is a growing menace. “There are some elements in society who do not believe in democracy and syncretic culture. This puts women at a doubly disadvantaged position.”