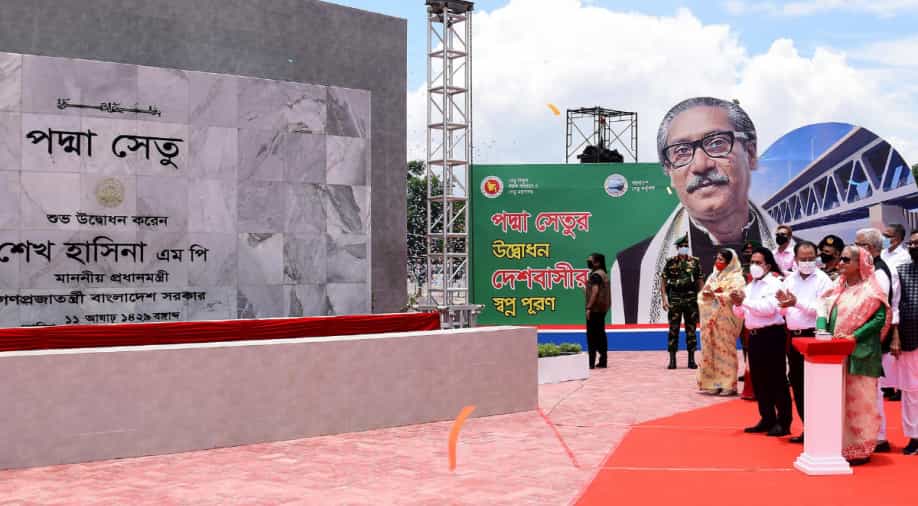 Bangladesh financed the $3.87 billion project itself after corruption allegations saw the World Bank and other lenders withdraw finance. Photograph:( AFP )

The inauguration of the Padma Multipurpose Bridge now officially the country's longest caps a key infrastructure goal by Prime Minister Sheikh Hasina in the nearly eight years since construction began.

Bangladesh on Saturday opened an important bridge near the capital Dhaka after a long construction plagued by delays, graft allegations, and even deadly lynchings sparked by rumours of human sacrifice.

The inauguration of the Padma Multipurpose Bridge now officially the country's longest caps a key infrastructure goal by Prime Minister Sheikh Hasina in the nearly eight years since construction began.

It ends an economic bottleneck that required freight destined for the country's poverty-stricken south and the Indian megacity of Kolkata to be slowly ferried over the Padma river, a major tributary of the mighty Ganges.

"This bridge is not just bricks, cement, iron, and concrete," Hasina told a crowd of nearly a million people who had gathered along the river's banks for its opening ceremony.

"This bridge is our pride, a symbol of our capacity, strength and dignity," the leader added.

But the project was also burdened by other, more vexing associations even before work began.

Bangladesh financed the $3.87 billion project itself after corruption allegations saw the World Bank and other lenders withdraw finance.

Canadian engineering firm SNC-Lavalin was banned from bidding on World Bank projects for a decade after it was accused of bribing officials over the project.

Prosecutors in Canada eventually declined to pursue corruption charges against company executives after a court ruled some wiretap evidence against them was inadmissible.

Engineers said building challenges for the project were "immense" as siltation left the bottom of the Padma river unstable, making it difficult to place spans and helping blow out the bridge's finish date by four years.

And in 2019, eight people were killed in vigilante lynchings sparked by social media rumours of children being kidnapped and sacrificed as offerings for the bridge's construction.

More than 30 others were attacked in connection with the rumours, mostly spread on Facebook, that said human heads were needed to help finish the project.

Despite its troubles, the 6.2 kilometres (3.8-mile) road and rail link has long been signposted as one of the most significant endeavours of Hasina's tenure.

Local media reported breathlessly on minor construction milestones, such as the completion of one of its 41 concrete spans.

Major roads across Dhaka were festooned with lights, lasers and decorations to mark Saturday's inauguration.