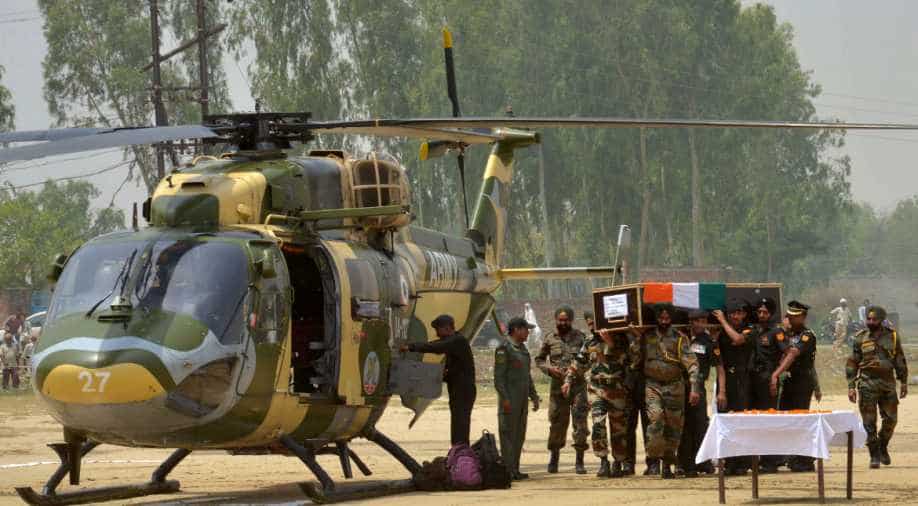 Indian Army personnel carry the coffin of Indian Army soldier Paramjeet Singh ahead of his funeral at Vein Pein village, some 45kms from Amritsar on May 2. Photograph:( AFP )

The Pakistan military Tuesday warned India against any "misadventure" after the Indian army cautioned Islamabad that it will have to face the consequences of mutilating bodies of two Indian soldiers.

The Pakistan army's remarks came during a hotline contact between the Director Generals of Military Operations (DGMOs) of Pakistan and India this morning to defuse the tension.

"Any misadventure shall be appropriately responded at a place and time of own choosing," according to a statement issued by the army.

The statement also said that Pakistan remains fully committed to maintaining peace and tranquillity along the LoC and expects the same from the other side.

The incident evoked a sharp reaction from India with Defence Minister Arun Jaitley saying such attacks do not even take place during war and that the whole country has full faith in the armed forces.

"Bodies of soldiers being mutilated is an extreme form of barbaric act. Government of India strongly condemns this act. The whole country has full faith in our armed forces which will react appropriately to the act," Jaitley had said.

India's Vice Chief of Army Staff Sarath Chand said that Pakistan will have to face the consequences of mutilating bodies of two Indian soldiers and the army will respond to the dastardly act at a time and place of its choice.