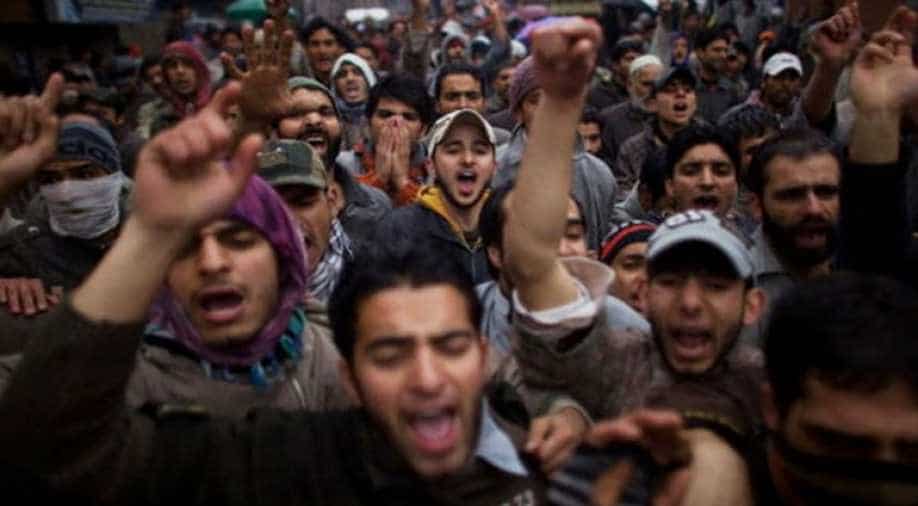 File photo of people in Gilgit-Baltistan out on streets shouting and protesting against Pakistan. Photograph:( Zee News Network )

The protests were held as part of a two-day convention of the United Kashmir People's National Party (UKPNP).

Activists from various parts of Pakistan-occupied Kashmir (PoK) gathered in Bagh district and carried out a protest rally to demand an end to Pakistan's 'illegal' and 'forceful occupation'.

The protests were held as part of a two-day convention of the United Kashmir People's National Party (UKPNP).

Activists raised concerns over the construction of dams and other projects, which, they claim, are aimed at excluding indigenous people from local development.

He added, "The Party leadership also expressed their concern that the government of Pakistan is violating State Subject Rule in Rawalakot, Kotli, Bagh, Neelum, Muzaffarabad and other areas and allocating land to its retired army-men, bureaucrats and businessmen".

UKPNP's exiled chairman Sardar Shaukat Ali Kashmiri addressed the activists in Bagh via telephone and asked protestors to urge Pakistan to vacate the territory and establish local authority by reviving the fundamental rights of the indigenous people.

In an exclusive interview, Maqsood told ANI, "The activists demanded Pakistan to release all those activists languishing in the prisons, including Baba Jan, who was jailed for peacefully demanding local development and the empowerment of local people in Gilgit Baltistan and Muzaffarabad."

The activists, during the protest, voiced their thoughts about serious environmental concerns in PoK and Gilgit Baltistan due to the construction of dams and other projects.

"The diversion of Neelum-Jhelum, which is known as Kishan Ganga in Jammu and Kashmir, has created a drastic environmental effect and affected the people in Muzaffarabad. We are of the view that Pakistan is establishing such dams that are not benefiting the local people. They are not empowering the local youth and they remain unemployed and unable to find a livelihood," Maqsood noted.

The activists also opposed the construction of the multi-billion dollar China Pakistan Economic Corridor (CPEC), which passes through Gilgit Baltistan.

Jamil said, "The UKPNP on international forums and with the (support of) regional political powers and regional governments are also demanding that they should use their influence to stop Pakistan from creating such a hostile environment after China-Pakistan Economic Corridor, which is not a pro-people project. We are of the view that the project is pro-military and it has a strategic interest. It is not directed towards developing local people in Gilgit Baltistan, Muzaffarabad, Balochistan or elsewhere."

The activists committed to continuing their struggle against the Pakistani occupation of PoK and Gilgit Baltistan.

Maqsood represented the activists' beliefs and said, "The government of Pakistan should abide by its international obligation and UN resolutions which ask her to vacate the territory to push back all the tribal invaders and to vacate its military from the region, but nevertheless, Pakistan has consolidated its occupation on both regions and exploitation of people and natural resources still continues to take place."