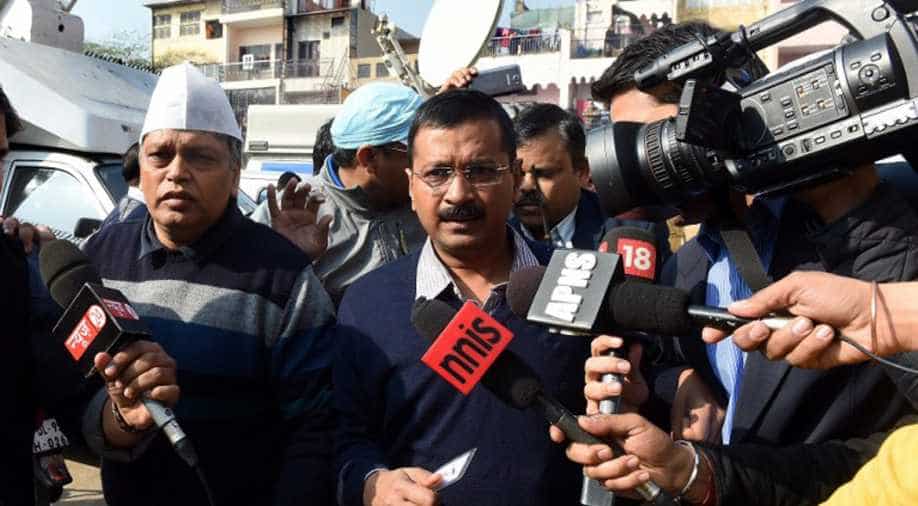 Arvind Kejriwal hit back saying it was a 'dirty trick' by Prime Minister Narendra Modi ahead of the Assembly elections on February 4. Photograph:( AFP )

The Indian government's income-tax (I-T) department has submitted a report to the election commission which states that the audit reports prepared by the Aam Aadmi Party (AAP) for donations of about Rs 27 crore do not match with the actual funds received by it from various donors.

Officials said this could form the basis for the cancellation of tax exemptions given under the I-T Act to the AAP and could also follow a stringent action of deregistration of the party, but all such decisions were exclusively under the domain of the Election Commission, PTI reported.

The report states that the records of donations made to the Arvind Kejriwal-led AAP during 2013-14 and 2014-15 are incorrect and have discrepancies, PTI reported. The department has been investigating the donations list of the party for over a year.

Income Tax officials said the AAP treasurer had acknowledged "certain errors" in the records in their communication with the taxman, PTI reported.

The officials said the alleged discrepancies in the donation records of the party were about Rs 27 crore.

Parties prepare audit reports, in consultation with their chartered accountants, and submit a copy to the I-T department as per the law.

The I-T report suggested that the violations were in contravention of tax laws that governed political donations as stipulated under the Income Tax Act, 1961.

AAP chief and Delhi chief minister Arvind Kejriwal alleged that it was a "dirty trick" by Prime Minister Narendra Modi to get the AAP deregistered because of fear of losing the state elections in Punjab and Goa, which begin tomorrow.

The AAP feels it is in with a chance in the Punjab polls, where it faces a triangular contest with the Congress and the incumbent SAD-BJP combine.

The AAP is hopeful of disturbing the ruling BJP's prospects in Goa as well.