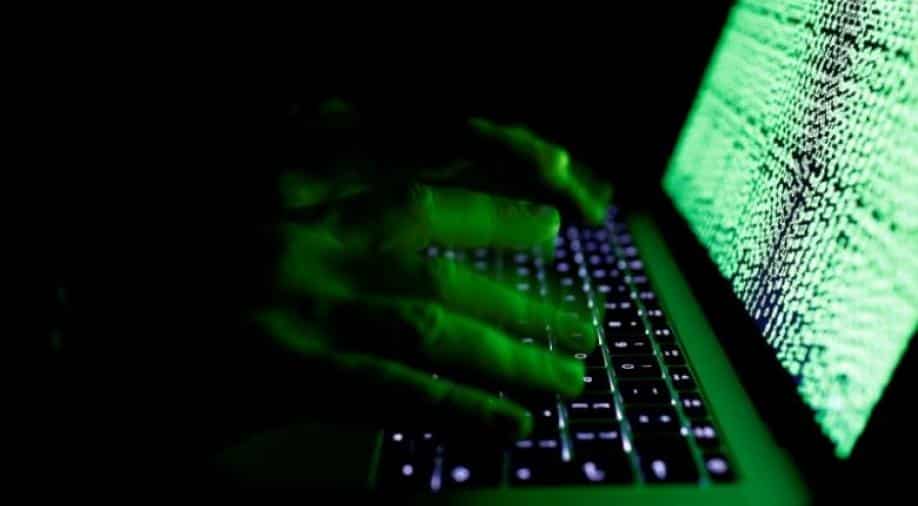 A man types on a computer keyboard in front of the displayed cyber code in this picture illustration. Photograph:( Reuters )

The PCs affected by the global ransomware attack were running Microsoft's Windows 7 operating system without the latest security updates. ||Researchers are struggling to try to find early traces of WannaCry.

Two-thirds of those caught up in the past week's global ransomware attack were running Microsoft's Windows 7 operating system without the latest security updates, a survey for Reuters by security ratings firm BitSight found.

Researchers are struggling to try to find early traces of WannaCry, which remains an active threat in hardest-hit China and Russia, believing that identifying "patient zero" could help catch its criminal authors.

They are having more luck dissecting flaws that limited its spread.

Security experts warn that while computers at more than 3,00,000 internet addresses were hit by the ransomware strain, further attacks that fix weaknesses in WannaCry will follow that hit larger numbers of users, with more devastating consequences.

"There are plenty of reasons people wait to patch and none of them are good," said Mador, a former long-time security researcher for Microsoft.

Data from BitSight covering 160,000 internet-connected computers hit by WannaCry, shows that Windows 7 accounts for 67 per cent of infections, although it represents less than half of the global distribution of Windows PC users.

In laboratory testing, researchers at MWR and Kyptos say they have found Windows XP crashes before the virus can spread.

Windows 10, the latest version of Microsoft's flagship operating system franchise, accounts for another 15 per cent, while older versions of Windows including 8.1, 8, XP and Vista, account for the remainder, BitSight estimated.

Any organisation which heeded strongly worded warnings from Microsoft to urgently install a security patch it labelled “critical” when it was released on March 14 on all computers on their networks are immune, experts agree.

Those hit by WannaCry also failed to heed warnings last year from Microsoft to disable a file sharing feature in Windows known as SMB, which a covert hacker group calling itself Shadow Brokers had claimed was used by NSA intelligence operatives to sneak into Windows PCs.

Microsoft has faced criticism since 2014 for withdrawing support for older versions of Windows software such as 16-year-old Windows XP and requiring users to pay hefty annual fees instead. The British government cancelled a nationwide NHS support contract with Microsoft after a year, leaving upgrades to local trusts.

Seeking to head off further criticism in the wake of the WannaCry outbreak, the US software giant last weekend released a free patch for Windows XP and other older Windows versions that it previously only offered to paying customers.

On Sunday, the US software giant called on intelligence services to strike a better balance between their desire to keep software flaws secret - in order to conduct espionage and cyber warfare - and sharing those flaws with technology companies to better secure the internet.

Half of all internet addresses corrupted globally by WannaCry are located in China and Russia, with 30 and 20 per cent respectively. Infection levels spiked again in both countries this week and remained high through Thursday, according to data supplied to Reuters by threat intelligence firm Kryptos Logic.

The ransomware mixes copycat software loaded with amateur coding mistakes and recently leaked spy tools widely believed to have been stolen from the US National Security Agency, creating a vastly potent class of crimeware.

"What really makes the magnitude of this attack so much greater than any other is that the intent has changed from information stealing to business disruption", said Samil Neino, 32, chief executive of Los Angeles-based Kryptos Logic.

WannaCry appears to target mainly enterprises rather than consumers: Once it infects one machine, it silently proliferates across internal networks which can connect hundreds or thousands of machines in large firms, unlike individual consumers at home.

An unknown number of computers sit behind the 3,00,000 infected internet connections identified by Kryptos.

Because of the way WannaCry spreads sneakily inside organisation networks, a far larger total of ransomed computers sitting behind company firewalls may be hit, possibly numbering upward of a million machines. The company is crunching data to arrive at a firmer estimate it aims to release later Thursday.

Researchers from a variety of security firms say they have so far failed to find a way to decrypt files locked up by WannaCry and say chances are low anyone will succeed.

However, a bug in WannaCry code means the attackers cannot use unique bitcoin addresses to track payments, security researchers at Symantec found this week. The result: "Users unlikely to get files restored", the company's Security Response team tweeted.

The rapid recovery by many organisations with unpatched computers caught out by the attack may largely be attributed to back-up and retrieval procedures they had in place, enabling technicians to re-image infected machines, experts said.

These factors help explain the mystery of why such a tiny number of victims appear to have paid ransoms into the three bitcoin accounts to which WannaCry directs victims.

Less than 300 payments worth around $83,000 had been paid into WannaCry blackmail accounts by Thursday (1800 GMT), six days after the attack began and one day before the ransomware threatens to start locking up victim computers forever.

The Verizon 2017 Data Breach Investigations Report, the most comprehensive annual survey of security breakdowns, found that it takes three months before at least half of organisations install major new software security patches.

"We haven't seen many organisations fall over and that's because they did some of the security basics," he said.