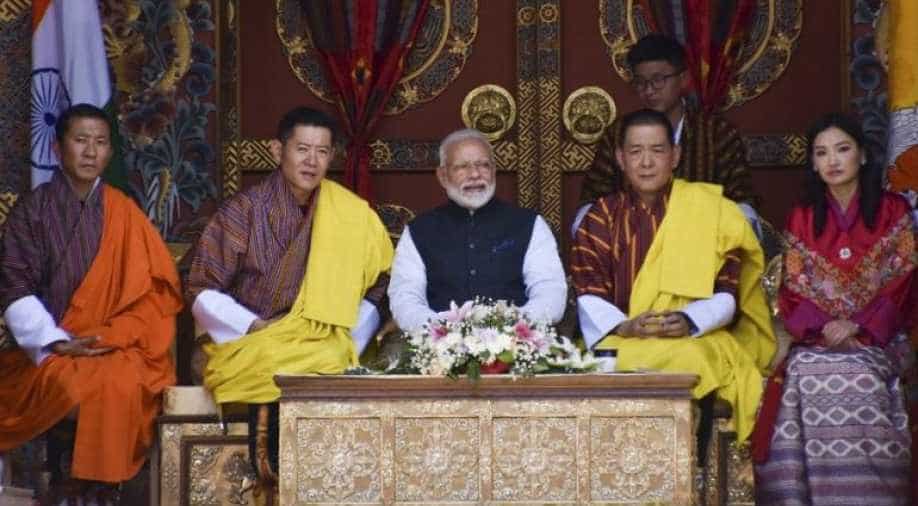 Kuzuzangpa la! I feel privileged to file this column from Thimphu, the beautiful capital of the Himalayan kingdom of Bhutan. With a host of other historians, biographers, musicians, intellectuals, and artists—local, Indian, and international, I am an invited speaker at the 10th anniversary edition of Mountain Echoes, ‘The Bhutan festival of arts, literature and culture’. The inaugural session has just concluded with a moving tribute to the recently deceased father of Her Majesty the Royal Queen Mother, Ashi Dorji Wangmo Wangchuk.

The Queen Mother is not only the patron but also one of the founders of the festival. In fact, the festival was conceived in her drawing room in a conversation with curator Namita Gokhale and our then ambassador Pavan Varma, author, senior JD (U) leader, and former MP. In subsequent years, Mita Kapur, Pramod Kumar and their Bhutanese partners have taken the festival forward, with support from the Jaypee group. Ten years ago, I could not make it to the festival opening, so I am especially happy to be here for its 10th anniversary.

In a way, the over-riding theme of Mountain Echoes, which is to share stories and create memories, also sums up its importance. Even those who considered Bhutan as little more than an attractive tourist destination suddenly became aware of its strategic significance after the Doklam crisis. The tiny mountain kingdom, with a population of less than a million, is of immense value to India as a long-standing friend and partner. The Indo-Bhutan friendship treaties of 1949 and 2007 only reinforced this well-known geopolitical and historic fact. Indeed, the Indian embassy in Bhutan, with its 74-acre campus, is the largest anywhere in the world. No wonder the current ambassador, Ruchira Kambhoj, is fully backing the festival.

India also plays a crucial role in the economic, technological and industrial development of Bhutan. With a peaceable, law-abiding, and contented population, Bhutan is considered a modern Shangri-La. Indeed, it prides itself on its very high Gross National Happiness (GNH) index. The phrase itself was the coinage of the former king, His Highness Jigme Singye Wangchuck. In an interview with a Financial Times correspondent at Mumbai airport in 1972, he famously quipped, “Gross National Happiness is more important than Gross National Product.” This idea is now recognised by the UN and has worldwide acceptance. Indeed Bhutan, which has practically no crime or corruption, is a rather special place in today’s ugly, aggressive, and stressful times. It is perfectly safe for locals and tourists alike, in addition to being relatively unspoilt.

Mountain Echoes, organised by the India-Bhutan Foundation in association with Siyahi, is a valuable avenue of strengthening and cementing people-to-people ties between our two countries. As the Queen Mother said, sharing each other’s stories of happiness and sorrow can create more lasting bonds than merely diplomatic relations between two nations. I was personally very moved by her reminiscences of her father, a self-made, frugal, hardworking, highly disciplined and compassionate man who presented an inspiring model to his many children, grandchildren, and great-grandchildren.

The house of Wangchuk to which the monarchy belongs was founded in 1907. The 39-year-old His Highness Jigme Khesar Namgyel Wangchuk is the current monarch, his father having abdicated in his favour in 2006. From wielding absolute authority, the Wangchuks have gradually favoured devolution of powers to democratic and elected institutions. Like Hindus, Buddhists also share the idea of the Dharma-Raja, the righteous ruler who selflessly serves the people and upholds Dharma. That is why Prime Minister Narendra Modi, although an elected leader and not monarch, is immensely popular in Bhutan as his recent visit shows. The people here consider him a righteous and selfless ruler.

It would be in the fitness of things if we reciprocate Indo-Bhutanese friendship by hosting an Indian version of Mountain Echoes. It would also serve to highlight and celebrate our own myriad mountain cultures. Hill cultures of the Himalayas share over a millennium of Hindu-Buddhist Dharmic commonalities. Living in Himachal Pradesh as I do, I was struck by the similarities of the traditions and cultural practices, including language, food, music, dance, and religion, all the way from Ladakh to Bhutan nearly 3,000 kms away.

There is a glorious cultural arc of Mahayana Buddhism that unites us. It passes through and includes Lahaul, Spiti, Dharamshala, Nalanda, Darjeeling, Gangtok, Tawang, going all the way to Lhasa, Tibet, and beyond to Mongolia. These precious cultural and civilisational ties have served us well both in times of adversity and prosperity. We need to preserve, protect, and enhance them for the coming generations too. “Mountain Echoes” offers an excellent platform for doing so. The organisers and curators, both Indian and Bhutanese, deserve our congratulations and felicitations on their successful 10th anniversary.