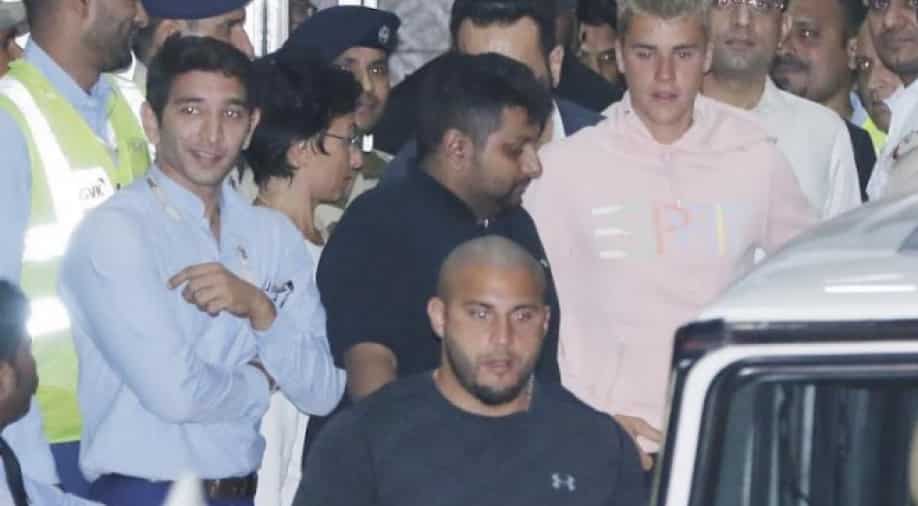 Justin Bieber has landed in India in the wee hours of the morning as part of the Indian leg of his “Purpose” tour. The concert is expected to host around 45,000 people with prices of tickets escalated as much as Rs. 75,000.

To welcome the pop star, several lined up outside the Mumbai airport. Amid tight security, fans were seen with posters and placards saying “We love You Justin” and “You Give Us Purpose”.

The queue of fans is building outside the DY Patil Stadium in Mumbai, India for tonight's #PurposeTour with Justin Bieber. (May 10) pic.twitter.com/GVGUPFHmPT

According to Reuters, one fan Shrishti said, “For the past three days, without any food or sleep, we are waiting for Justin, just to see a glance of him. You can see our excitement, we haven't slept. There is too much excitement. We came to Mumbai without informing our parents and we are all excited.”

He was seen wearing a pink hoodie entering his vehicle outside the airport. Indian actor Salman Khan’s most trusted and popular bodyguard Shera was spotted escorting the star.

The popstar will be living in St. Regis Hotel in south Mumbai amid Z-plus level of security.

Bieber will be performing at the DY Patil Stadium at 8 pm today. According to tour organisers, White Fox, he will be flying in a private helicopter to the stadium for his concert.

At the venue, Navi Mumbai Police has deployed massive security arrangements including surveillance by drones. There will be around 500 police personnel and 25 officers for security and emergency disaster management.

The tour is to promote his fourth album,"Purpose" which has hogged limelight for experimentation with adventurous electronic sounds.

Here's something from Beiber's Dubai concert where he performed on May 6, 2017:

(36) Another video of Justin Bieber onstage performing at the #PurposeTour in Dubai, UAE. (May 6) pic.twitter.com/1tgPOcWGtI

(31) Another video of Justin Bieber onstage performing at the #PurposeTour in Dubai, UAE. (May 6) pic.twitter.com/kt5DxycZZP

(24) Another video of Justin Bieber onstage performing at the #PurposeTour in Dubai, UAE. (May 6) pic.twitter.com/SPOr5Iejld

Those attending the concert today, here is some useful information:

For those of you who are attending tonight's #PurposeTour show with Justin Bieber, here is important information on parking and entrances. pic.twitter.com/vNNIvcUYp0

Who all are excited for the first ever Justin Bieber concert in India?