Taboo or not taboo? Artists expose naked truths in Pakistan 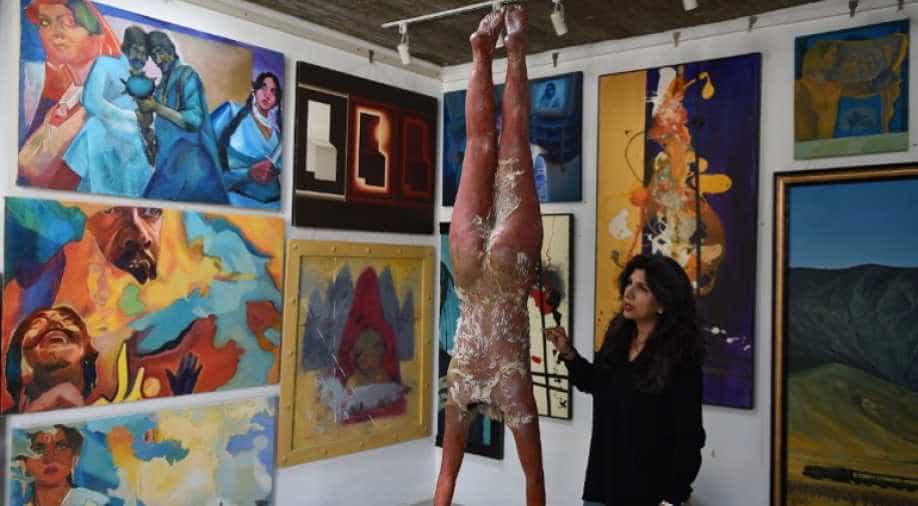 'If we want to make a sculpture so we must be aware that it should not cause any harm to the society,' said Hadiqa Asif, a visual arts student at Karachi University. In photo: Pakistani Sameera Raja, the owner of Canvass Gallery on May 2, 2016. Photograph:( AFP )

Follow Us
Mohammad Ali sits before a painting of a semi-naked man and declares his work has never been censored in conservative Muslim Pakistan where an artistic vanguard are challenging taboos in the chaotic city of Karachi.

"I have done some pretty bold and risky works but luckily I did not face any," says the 27-year-old, a rising star who paints figurative, contemporary images exploring gender, politics and sex.

Ali has a theory about why, in a developing country where women are traditionally veiled and even unproven allegations of blasphemy can stir mob violence, he has been so free.

"People, a lot of them don't have access to even a decent meal and if they are starving you cannot make them interested in art instead of food," he says.

Pakistan remains deeply bound to strict religious norms, even though art bursts from unexpected places, such as the acid-trip trucks wild with bells and bright, elaborate images that traverse the country.

In recent years Karachi's concrete sprawl has become home to a rush of galleries and dealerships bullish on the country's art market as a new generation challenges constraints that date back to the Islamisation of the 1980s.

In the port city's trendy Canvass Gallery, owner Sameera Raja takes AFP on a tour of the nude and homosexual art on display.

"These are not the things which are taboos in our society, at least not in the art-related population," she says.

"Having said that, it doesn't that mean I am going to socially risk the artist by putting it up on a the public platform. Absolutely not," she swiftly adds.

Raja is all too aware that, despite the confidence of artists such as Ali - whose paintings have so far been confined to galleries and private spaces - such art only finds safe haven in showrooms like hers and in the bedrooms of the Pakistani elite.

Her caution is echoed by other artists, such as third-year visual arts student Hadiqa Asif at Karachi University.

"If we want to make a sculpture so we must be aware that it should not cause any harm to the society," she says, chiselling at a piece of wood.

Some artists point to the Islamisation of Pakistan by military dictator Zia ul-Haq in the 1980s as a ground zero of sorts for conservative taboos, and other forms of art that flourished because of them, such as calligraphy.

"During the regime of Zia ul-Haq there was much noise of imposition of Islamic government in the country," prominent Pakistani artist Mashkoor Raza, famous for his abstract images of women and horses, recalls.

"Our seniors would draw nudes, but fearing their arrest they started calligraphy of the religious verses and Sufi poetry."

He said he found himself unable to earn a living, and worked in a textile mill as a designer for nearly a decade, using his savings to buy brushes, paints and canvas.

Zia was assassinated in 1988, and the 1990s saw galleries and art shops mushroom in urban centres like Karachi.

"After the 90s, I became the owner of my own home, car and whatnot," says Raza, who now lives in a posh neighbourhood fanned by the city's sea breezes.

Estimates by gallery owners and art critics put the number of galleries, framers and dealers in Karachi alone in the hundreds.

"They are growing exponentially, it's a huge market, I think," comments Raja the gallery owner.

No nudes are good nudes?

This fresh dynamism is having a potent effect, argues Munwar Ali Syed, an art professor at the state-run Karachi University.

"Of course, we are very cautious here to censor human body parts," he says. "There are some limitations."

But the squeezing of liberal thought does not stifle creativity, he claims - rather it spurs his students in new directions.

"When you realise that there are some limits and boundaries which you can not cross, you work more creatively," he says, citing a sculptor named Mohammad Ismail.

Eight years ago, Ismail fell from the second storey of a building where he was supervising construction and broke his back, leaving him confined him to a wheelchair for life.

"My own skeleton got distorted so I focus on it," he tells AFP, seated next to a worktable as he puts the finishing touches on a new piece.

"I searched the intricacies of the skeleton, I drew my strength from it and I tried to support myself through this."

Despite the shift and the brimming confidence of artists like Mohammad Ali, change, already decades in the making, remains slow.

For many sex - contrary to the received wisdom - still doesn't sell.

"I don't think that there is a room for the nude in Pakistan other than what an artist makes privately for themselves," Durriya Kazi, head of the visual arts department at Karachi University, told AFP.

"I don't think it is relevant to our society."