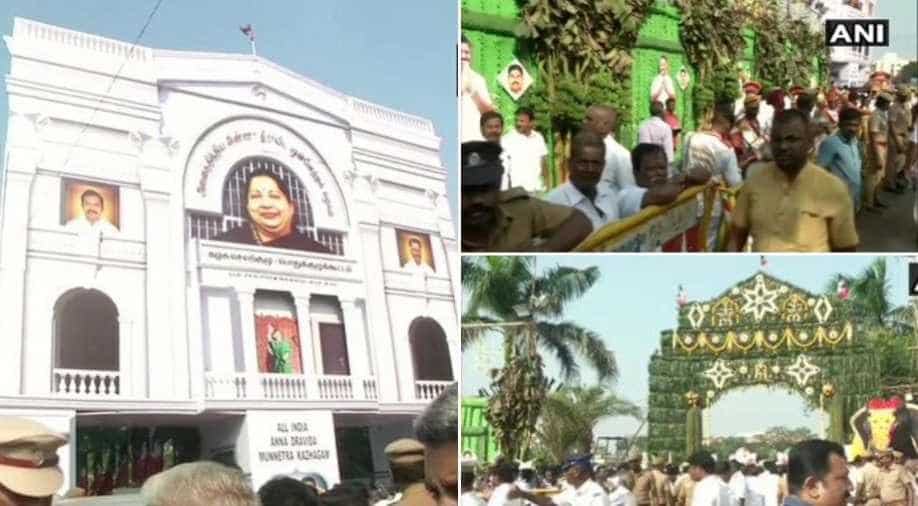 Celebrations outside the venue of the AIADMK's executive council meeting. Photograph:( ANI )

The meeting is expected to be chaired by Party chairman E Madhusudanan and coordinator O Panneerselvam and joint coordinator Edappadi K Palaniswami will also be present in the meeting.

After a gap of two longs years, the All India Anna Dravida Munnetra Kazhagam (AIADMK) on Sunday held its executive council and general body meeting in Chennai.

The meeting was held at a private hall in Vanagaram, which is situated on the outskirts of Chennai city. Chief Minister Edappadi K Palaniswami & Deputy Chief Minister Ottakarathevar Panneerselvam were among the people present at the meeting.

This year, the workers of the political party have installed a few feet tall portraits of former Tamil Nadu Chief Minister Jayalalithaa and also has called bands to play music and a decorated elephant carrying her photo frame on its back outside the venue.

"The general council meeting is a family function for all AIADMK workers. Every year our Amma use to attend this meeting but this time we have installed her portray at the venue of the meeting," said AIADMK party worker.

"Our Chief Minister is also working on the lines of Jayalalithaa and I am sure under his abled leadership we will again win 2021 assembly election. AIADMK will again establish its rule in the state. We are all supporting him," he added.