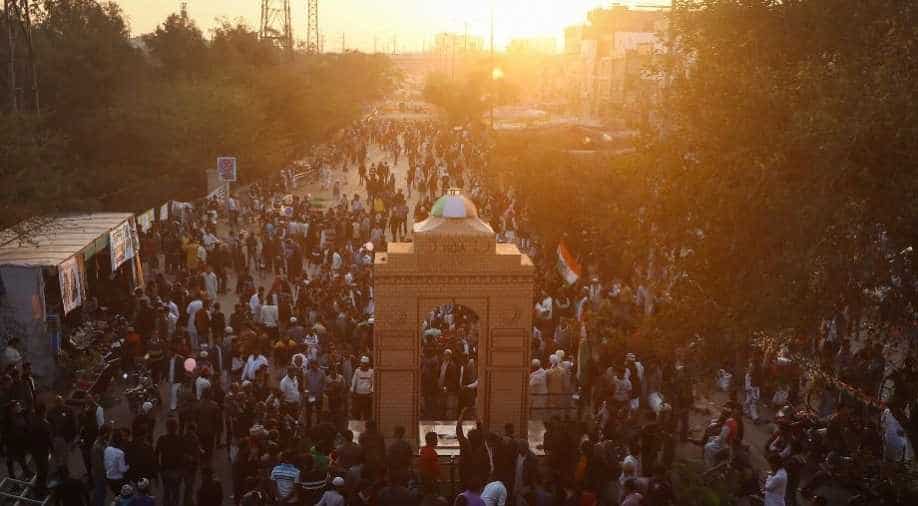 The protesters, who had announced that they will take out the march on Sunday, said they were awaiting a nod from the police which, they claimed, had sought some time.

Shaheen Bagh protesters on Sunday tried to march to Home Minister Amit Shah's residence here for a dialogue over the amended citizenship law, but were stopped by police after a little distance from the sit-in site as they did not have permission from authorities to take out the rally.

The protesters, who had announced that they will take out the march on Sunday, said they were awaiting a nod from the police which, they claimed, had sought some time.

A large posse of security personnel was deployed at Shaheen Bagh in south-east Delhi where hundreds of women protesters gathered to march towards Shah's residence on the Krishna Menon Marg for a dialogue over the Citizenship (Amendment) Act (CAA).

Barricades were put up in the area and the protesters were stopped a little distance from the site.

The protesters chose an eight-member delegation, including elderly women called 'dadis' of Shaheen Bagh, to approach the police "to allow them" to meet Shah and asserted that they will carry out the march peacefully.

"Police said they have forwarded our request to meet the home minister and have sought some time to arrange it," Javed Khan, one of the protesters, said.

He said the protesters will replan their march after getting confirmation from the police.

Another protestor Arbaaz said, "We will not march ahead as the police have assured us that our request has been forwarded to the authorities concerned. Amit Shah has not communicated to us anything directly but it was through a news channel."

"So, how does he want us to meet him. We are carrying out a peaceful protest so why would we need an official appointment from him?" he asked.

Another protestor Aamir said "We don't have any doubt about the CAA. We don't need any explanation or clarification on it. We are only going to meet Amit Shah to teach him the Constitution."

Unable to get the requisite permission, the anti-CAA protesters, mostly women, returned to the site where they have been holding the sit-in against the citizenship law, National Register of Citizens (NRC) and the National Population Register (NPR) for the past two months.

Police officials, including DCP (Southeast) R P Meena and Additional DCP (Southeast) Kumar Gyanesh, held talks with a group of protesters and assured them that their application has been forwarded to the authorities concerned for further action.

"The protesters wanted to know about the status of their application. This was regarding permission for marching from Shaheen Bagh to the residence of the home minister. They had given the application to us.

"We told them that the application was given to DCP New Delhi and it will be further submitted to the police headquarters which will take a final call on it," Meena said.

After continuous dialogue and efforts by senior police officials, including additional DCPs, of the South East District with a group of protesters, including the 'dadis' of Shaheen Bagh', the march was postponed, he said.

The march was unlawful as it did not have necessary permissions from law enforcement agencies concerned, Meena said in an official statement.

"The protesters accepted the police officials' requests and did not proceed. Police have requested them to make a delegation and the same will be facilitated for further appointment and meeting," he added.

Three days ago, Shah had said anyone who wants to discuss issues related to CAA with him can seek time from his office. "(We) will give time within three days," the home minister had said.