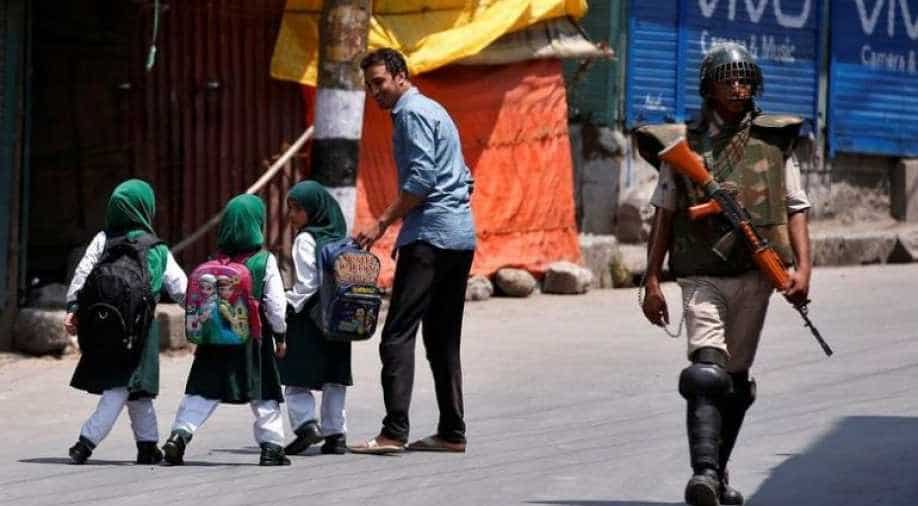 The primary 'healthcare across Kashmir has also been as usual,' Department of Information and Public Relations said on Twitter.

The Jammu and Kashmir administration on Saturday denied reports claiming a shortage of medicines or healthcare crisis in the Valley.

Calling the reports "baseless", the Department of Information and Public Relations (DIPR), Jammu and Kashmir asserted that health services are functioning normally in the region and urged people to not believe in "rumours and fake news".

In a series of tweets, the administration said, "Srinagar: Health Services functioning normally. Don't believe in rumours and fake news. 1. Nearly 5000 major surgeries have been performed in hospitals in Srinagar from August 5 till date."

It added, "Besides the Sher-i-Kashmir Institute of Medical Sciences or SKIMS at Soura and the SKIMS Medical College and Hospital at Bemina, the surgeries have been performed in all associated hospitals of the Government Medical College or GMC Srinagar."

The Jammu and Kashmir administration stated, "In the Government Medical College (GMC) in Srinagar associated hospitals, the number of surgical procedures are over 3000 -- including around 700 in the main trauma SMHS Hospital, over 800 in the main orthopaedic Bone and Joints hospital and around 400 in the Super Speciality hospital."

In the Lal Ded hospital which is Kashmir's main maternity hospital, "around 1200 surgeries have been performed during this period," it added.

"Besides surgeries, the general healthcare services provided to patients in these hospitals during this period has been business as usual with around 95000 patients seen in their OPDs and over 10 thousand patients admitted for treatment in their IPDs," DIPR stated.

The routine laboratory investigations and radiological procedures like MRI and CT scan performed in the hospitals during the period add up to over one lakh, "These include among others around 5500 X-Rays, over 6000 USGs, around 2000 ECGs, around 2000 CT Scans, 220 MRIs and some 750 super-speciality procedures," it added.

The general healthcare services like patients seen in outpatient departments and those admitted to inpatient departments of these hospitals include totals of over 60,000 OPDs and over 5000 IPDs."Different medical investigations of patients conducted in SKIMS MCH alone add up to around 70000," it added.

The primary "healthcare across Kashmir has also been as usual."

"In Srinagar alone, some 30000 patients were seen in OPDs and around 1100 admitted in IPDs of different centres. 10 Major surgeries and some 800 different kinds of medical tests were also performed," DIPR tweeted.

"These figures are a clear indication that healthcare services in Kashmir have been delivering as usual. While the period has seen about 20 per cent decrease in services it is not unusual in times of major festivals or events like it was in this month," it stated.

With regards to the status of stocks of medicines in hospitals in Kashmir, the administration stated that supplies are made in two equal halves for two six-month periods per annum.

"The first half is still sufficient to last until the end of September. The second half of the order that will last until March 2020 will be received and distributed as usual before October. Additional requirements if any are being provided immediately," it stated.

In Srinagar, the administration said that it has provided funds to several hospitals for procuring additional medicines. The latter is to cover requirements that patients usually get from retail markets.

The administration further noted that "staff attendance in all these healthcare institutions is being strictly monitored."

"It has been around 95 per cent throughout this period," DIPR said.

In conclusion, DIPR stated, "News reports suggesting a shortage of medicines or healthcare crisis in Kashmir are therefore clearly baseless.

"Earlier this month, the Centre had abrogated Article 370 in the region and passed the Jammu and Kashmir (Reorganisation) Act, 2019, bifurcating it into two Union Territories.