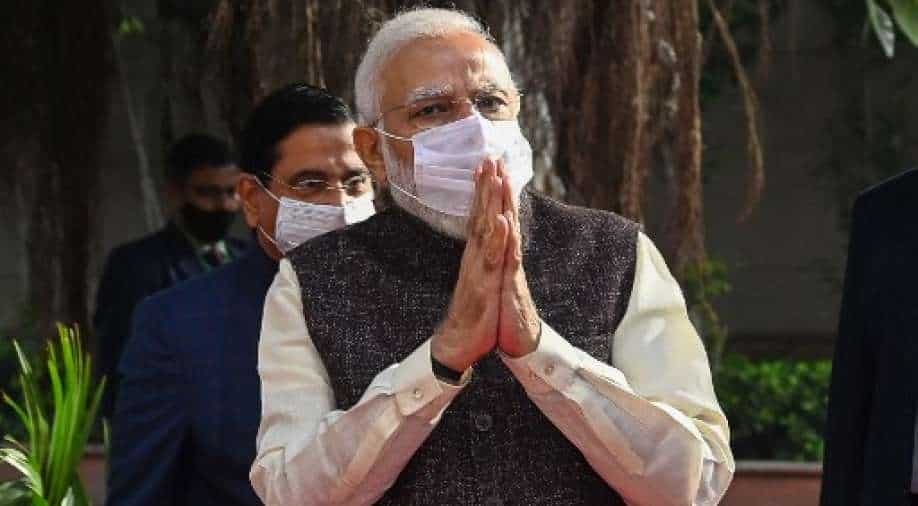 PM Modi will be travelling to UAE in January 2022 Photograph:( AFP )

PM Modi is expected to travel to Germany for the 6th Indo-German Inter-Governmental Consultations(IGC) that alternates every two years between the two countries.

A whole host of countries from West Asia to Europe will be on the list of Prime Minister Narendra Modi's foreign travel in 2022, all of which depends on the COVID-19 situation globally.

Amid the COVID-19 crisis, few VVIP visits have happened. PM Modi visited Bangladesh in March this year, his first visit abroad since November 2019. Since the Dhaka visit, PM has been to Washington for the Quad summit, New York for United Nations General Assembly meet, Italy for G20 summit and UK's Glasgow for the climate summit.

It looks clear now that Prime Minister will be travelling to the United Arab Emirates in early January. PM Modi will be visiting the mega India pavilion at Dubai Expo. It will be PM Modi's fourth visit to the country since 2014. He had earlier travelled to the west Asian country which has emerged as a close ally of New Delhi in 2015, 2018 and 2019.

PM Modi is also expected to travel to Germany for the 6th Indo-German Inter-Governmental Consultations(IGC) that alternates every two years between the two countries.

Former German Chancellor Angela Merkel had been to India for the IGC in 2019. The visit of PM Modi to Berlin will provide an occasion to meet the new Chancellor of Germany Olaf Scholz.

Asked about the visit, German envoy Walter Lindner in response to a WION question earlier this year said, "You have to ask your prime minister because this is the standard because every two years either we come or PM comes to Germany. Merkel was here two ago, so next year if the Covid situation allows your PM will be in Germany. So we hope it happens within the next 6 months, this will be the first official meeting of the two heads of government."

Germany is also the chair of G7 in 2022. India has been regularly invited for the summit since 2019 when France was the host of the summit. Last year saw the then US President Trump talking about inviting India and others for the summit in the country but the summit never happened. This year UK as the host invited India but due to the second wave of the COVID-19 crisis in India PM Modi could not visit.

Indonesia's Bali will see leaders of G20 grouping descending for the annual summit of the twenty most powerful economies. Next year's summit is important for India since the presidency will be handed over to New Delhi. Indonesian President Joko Widodo will hand over the presidency to PM Modi during the summit that is expected to take place in October 2022. India will host the summit in 2023 for the first time.

Russia will be a key stop next year for the annual India-Russia summit. Russian President was in New Delhi in December for the summit that alternates annually between the two countries.

PM Modi last visited Russia's Vladivostok in 2019 for the summit.  President Putin's was the only head of state to visit India this year after Denmark PM's visit. New Delhi in pre-Covid times has been a busy capital with many world leaders visiting the country. The last major visit to India was of Myanmar's then president and former US President Trump in February 2020.

Japan will be the destination for the second Quad in-person summit. The Quad grouping of India, US, Australia and Japan consolidated this year with a virtual summit followed by an in-person summit in September in Washington.

The grouping whose emergence China is not very pleased about has worked on a number of issues from producing Covid vaccines and Quad principles on technology, design, development and governance. The in-person Quad summit in Japan is likely to take place in February according to initial indications.

In the neighbourhood, PM could travel to Sri Lanka for the BIMSTEC or Bay of Bengal Initiative for Multi-Sectoral Technical and Economic Cooperation.

Sri Lanka is the chair of the group and will host the 5th in-person summit next year. The country was expected to host the summit this year but it did not materialise. On the agenda at the summit will be the approval of the BIMSTEC Charter, BIMSTEC Master Plan for Transport Connectivity & BIMSTEC Convention on Mutual Legal Assistance on criminal matters.

The grouping is also working on the finalisation of the BIMSTEC coastal shipping agreement and the motor vehicles agreement. In 2019, India had invited BIMSTEC heads of government and states for PM Modi's oath-taking ceremony for the second term. After Sri Lanka, Thailand will be the host of the grouping. BIMSTEC group has been high on India's priority given SAARC has largely been defunct.

Rwanda is likely to be the Prime Minister's destination in Africa since the country hosts the Commonwealth summit (or Commonwealth Heads of Government Meeting) CHOGM meet. The summit has been postponed twice in 2020 and 2021 due to Covid and new dates have been suggested. PM Modi last participated in the CHOGM summit in the UK in 2018.

Other destination of India's PM includes Cambodia for the ASEAN summit, Uzbekistan for the Shanghai Cooperation Organization summit and China for BRICS but it depends if the summit happens in-person. The BRICS and ASEAN summit have been taking place virtually for the past two years. The SCO summit this year was in hybrid mode due to the COVID-19 crisis.