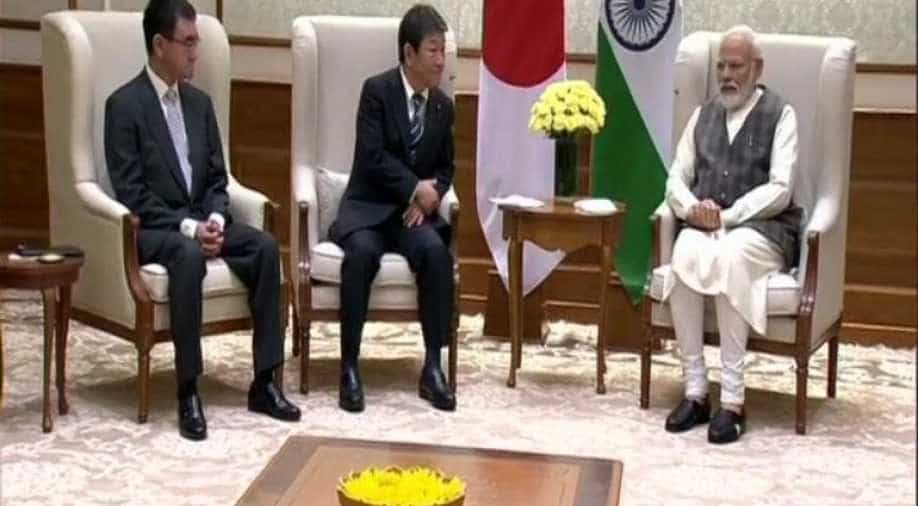 Another meeting of India-Japan Foreign and Defence Ministerial Dialogue (2+2) will be held in the evening and the two sides are expected to discuss defence and security, amongst other issues of mutual interest.

The meeting is being held in pursuance of the decision taken by Modi and his Japanese counterpart Shinzo Abe during the 13th India-Japan Annual Summit held in Japan in October 2018, with an aim to institute a Foreign and Defence Ministerial Dialogue for further deepening bilateral security and defence cooperation, the Ministry of External Affairs (MEA) said in a statement.

"The 2+2 meeting would provide an opportunity for the two sides to review the status of and exchange further views on strengthening defence and security cooperation between India and Japan so as to provide greater depth to the 'India-Japan Special Strategic and Global Partnership'," the statement added.

The two sides will also exchange views on the situation in the Indo-Pacific region and their respective efforts under India's 'Act East Policy' and Japan's 'Free and Open Indo-Pacific Vision' for achieving their shared objective of peace, prosperity and progress to realise a better future for the people of the two countries and the region.

The dialogue has come ahead of the summit-level meeting between Prime Ministers Narendra Modi and Shinzo Abe later in the year.