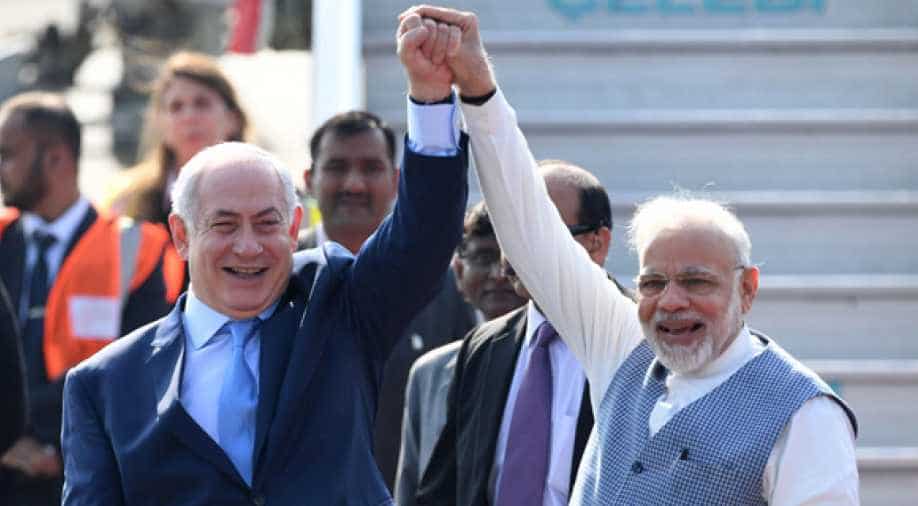 "Mazel Tov (congratulations) my friend @netanyahu for forming your fifth government in Israel," PM Modi wrote on Twitter in Hebrew and English.

Prime Minister Narendra Modi on Sunday congratulated his Israeli counterpart Benjamin Netanyahu, as he and his rival-turned-partner Benny Gantz joined hands to form a coalition government, ending months of political uncertainty in the country.

"Mazel Tov (congratulations) my friend @netanyahu for forming your fifth government in Israel," PM Modi wrote on Twitter in Hebrew and English.

"I wish you and @gantzbe (Benny Gantz) success and look forward to continue working closely with your government to further strengthen India-Israel strategic partnership," the prime minister said.

Mazel Tov my friend @netanyahu for forming your fifth government in Israel. I wish you and @gantzbe success and look forward to continue working closely with your government to further strengthen India-Israel strategic partnership.

Netanyahu on Sunday announced that a new government led by him would be sworn-in with a pledge of Israeli sovereignty over the West Bank to write another glorified chapter in the history of Zionism.

On Wednesday, Netanyahu announced that he has succeeded in forming a unity government in letters sent to President Reuven Rivlin, and Blue and White party Chairman Benny Gantz, who was temporarily serving as the speaker of Knesset (Israeli Parliament).

The government was to be sworn-in on Thursday but internal squabbles in the ruling Likud party over ministerial claims postponed it.

The new government, which according to the coalition agreement, will see Gantz replace Netanyahu as Prime Minister after 18 months on November 17, 2021, as the per power-sharing deal.

Netanyahu would then acquire the title of "Alternate Prime Minister", something that Gantz would now enjoy while also being the Defence Minister.

The government with 32 ministers initially will swell to 36 in six months, making it the largest government in the Jewish state's history.

During his tenure as justice minister, Ohana repeatedly attacked the judiciary and those leading it as they pushed forward with criminal investigations, and eventually indictments, against Netanyahu.

Netanyahu has denied any wrongdoing and his trial is set to start later this month.
Ohana's possible appointment as public security minister has sparked speculation among top police officials that he may oppose possible new probes against Netanyahu.

The beleaguered Israeli Prime Minister managed to hold on to his right-wing bloc amid three inconclusive polls to force his main rival Gantz to finally succumb to the demand of a broad national unity government.