Mamata Banerjee calls off her dharna, says will 'take up issue' next week in Delhi 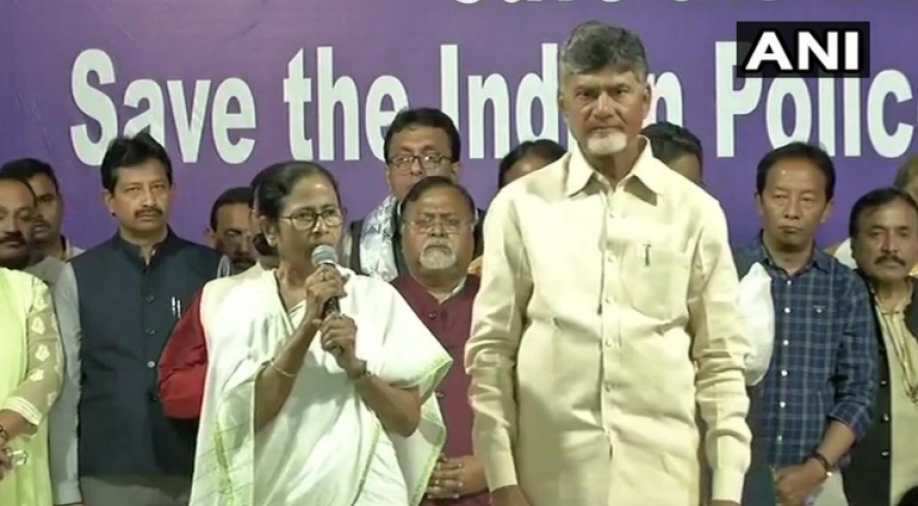 Mamata calls off her 'Save the Constiution' dharna Tuesday evening. Photograph:( ANI )

'The (Supreme) Court gave a positive judgement today. Next week, we will continue to take up the issue in Delhi,' Mamata said.

West Bengal Chief Minister Mamata Banerjee has called off her "Save the Constitution" dharna in Kolkata, while adding that she would "take up the issue" next week in Delhi.

"This dharna (Save the Constitution) is victory for the Constitution and democracy, so, let us end it today," Mamata said Tuesday evening with Andhra Pradesh Chief Minister Chandrababu Naidu by her side.

"The (Supreme) Court gave a positive judgement today. Next week, we will continue to take up the issue in Delhi," Mamata added.

Naidu and other opposition leaders had had closed-door discussions with Mamata.

West Bengal Chief Minister Mamata Banerjee in Kolkata: They (Central govt) want to control all the agencies including the state agencies also? PM you resign from Delhi and go back to Gujarat. One man govt, one party government is there. pic.twitter.com/RckwAR0uUE

Mamata had announced her dharna Sunday night after a CBI team showed up, reportedly unannounced, at Kolkata Police Commissioner Rajeev Kumar's home. The CBI accused Kumar of slow-walking the investigations into the alleged Saradha and Rose Valley ponzi schemes.

Mamata said the CBI turning up announced at the Kolkata Police chief's home was a "destruction of the federal structure". She announced her dharna next.

The CBI has taken Kumar to the Supreme Court, accusing him of destroying evidence in the investigations. On Tuesday, the court ordered Kumar to join the CBI investigation. It said Kumar would meet with the CBI in the neutral location of Shillong, Meghalaya.

It also ordered that he could not be arrested.

On Monday, when the CBI made the charge that Kumar was destroying evidence, the court said there was nothing in its submission to prove the claim. It added however that it would come down very heavily on Kumar should the CBI put forward any evidence to prove its claim.

It was the Supreme Court that had handed the investigations into the alleged Saradha and Rose Valley ponzi schemes to the CBI. The SIT (special investigation team) team investigating the alleged scams was being headed by Kumar.