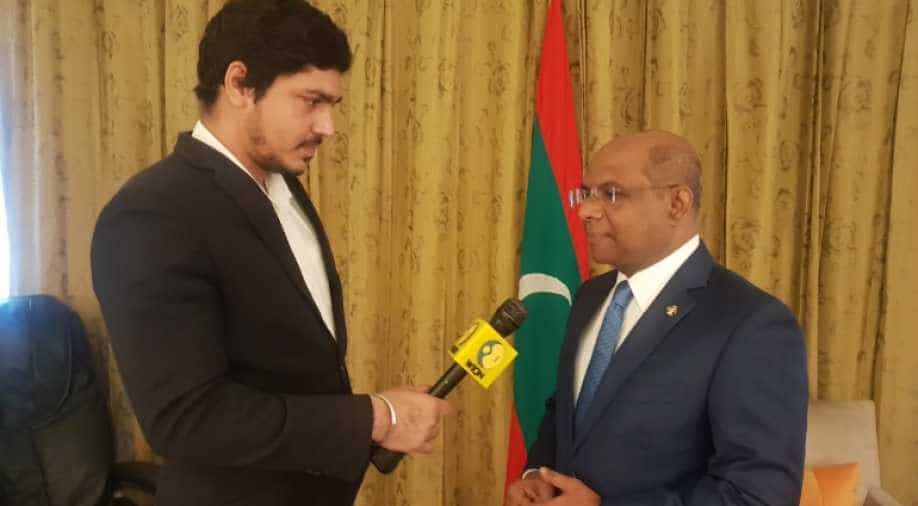 Indian parliament has its right, granted by the people of this country and constitution on appropriate laws. It is not for the Maldives to comment on such an issue, said Abdulla Shahid.

The Maldives has said that it respects India and other neighbouring countries "domestic processes", in response to a question on the citizenship amendment bill.

Speaking exclusively to WION, Maldives Foreign Minister Abdulla Shahid who is on an India visit backed the Indo-Pacific concept, lauded India's development and also talked about climate impact on his country.

WION: What is the main focus of your visit?

Abdulla Shahid: My visit this time is to co-chair the Maldives-India joint commission. This Joint Commission was supposed to meet every two years, but could not and last time it happened was in 2015. Since President Solih came in office, both the Indian and Maldives leadership have had several meetings. We saw PM Modi attending President Solih's inauguration and then one month after President Solih visited India. This September both met and every time they meet, an ambitious agenda set and it is for us officials to make sure it happens and is delivered. Dr Jaishankar and I will sit with our ministries and will set agenda for next 2 years. The joint commission will review, what has been done during the last one year and set agenda for the next 2 years.

WION: How do you see India's development assistance?

Abdulla Shahid: India is today and has always been one of the closest development partners we have had. Always, good to sit with Indian leadership and discuss future work and number of projects are underway. Last week we saw both leaders announcing the project and in the next few months, we will see the groundbreaking of several projects. That is how the development work is going on.

WION: You have become the member of IORA—Indian Ocean Rim Association, what role do you see in the group?

Abdulla Shahid: We back Indo-Pacific strategy. I met Secretary Pompeo in Washington and discussed the Indo-pacific strategy with him. We firmly believe that It is essential for peace and security of Indian ocean and it maintains freedom of navigation for all and it should not be controlled by certain countries and limited to certain countries and that is the role we will play.

WION​​​​​​​: How are you balancing tourism versus environmental concerns?

Abdulla Shahid: We have had, since 1972, a very useful tourism brand so much so that we can say Maldives tourism is one of the world-class tourism industry. We are proud of what we have achieved in such a short period in maintaining the environmental standards we have obtained. we not only talk about the environment, but we practice protection of the environment. Today, not only climate change is going to impact countries like ours who entirely depend on the ocean, but single-use plastic which is being dumped into the ocean, it is suffocating and killing the ocean. We have to address the issue, happy that India is also on the same page on this issue.

WION​​​​​​​: How do you see the current domestic discourse on citizenship Amendment bill in India?

Abdulla Shahid: What we, able to have with India and our neighbouring countries is, respect to its domestic processes. Indian parliament, as I have always said, has its right, granted by the people of this country and constitution on appropriate laws. It is not for the Maldives to comment on such an issue.