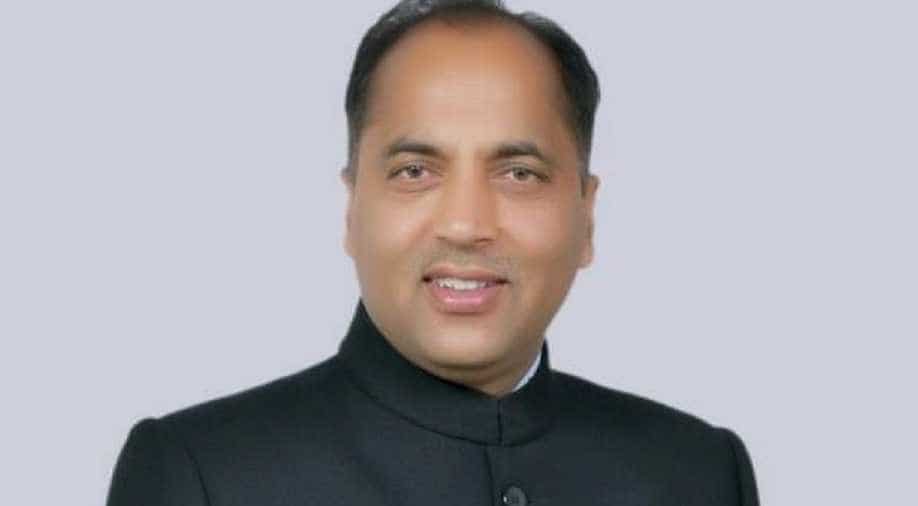 Thakur belongs to a poor Rajput community and was born on January 6, 1965, in Tandi village of Mandi's Thunag area.? Photograph:( Others )

Five-time MLA from Seraj, Jairam Thakur is one of BJP's senior leaders widely known for his humble, clean and non-aggressive style of politics.

Thakur was sworn in as chief minister of Himachal Pradesh on December 27 in a ceremony which was attended by PM Modi, Amit Shah and several other leaders.

The 52-year-old leader emerged as one of the frontrunners for the top post after the defeat of BJP leader Prem Kumar Dhumal in the recently-held Himachal Pradesh assembly elections.

Thakur belongs to Rajput community and was born on January 6, 1965, in Tandi village of Mandi's Thunag area.

His parents were farmers and therefore, had limited earnings. He also had five other siblings - two sisters and three brothers.

He did his post-graduation from Panjab University, Chandigarh, after which he decided to join politics.

During his under-graduation days in Vallabh Government College in Mandi, Thakur joined ABVP and won the first election under ABVP flag.

Thakur, a former state unit chief and rural development and panchayati raj minister in a government headed by Dhumal, is considered close to the RSS, where he stayed for three years before joining the Bharatiya Janata Yuva Morcha in 1993.

Thakur contested assembly polls on a BJP ticket in 1993, which he lost but went on to win the 1998 elections from Seraj and every state election after that.

In 1998, he was given a ticket from Chachiot Vidhan Sabha segment after defeating (This should be just defeated. You first get a ticket and then you defeat someone, no?) Moti Ram Thakur by almost 6,000 votes.

The BJP then formed the government in Shimla under Prem Kumar Dhumal, with the support of the Sukh Ram-led Himachal Vikas Congress. Thakur had been a key member in the development of one of the state’s most undeveloped and backward areas, according to his constituents. (We can remove this para)

He was a Cabinet minister in the BJP government led by Dhumal from 2007 to 2012.

In 2012, he won against Congress’s Tara Thakur by 11,254 votes making it one of his biggest victory margins so far in Himachal Pradesh.

A soft-spoken man, Thakur's strength is that he is seen as a leader who has managed to straddle the party's warring factions in the state.

The BJP ousted the Congress from power by winning 44 out of the 68 seats in the recent assembly polls.