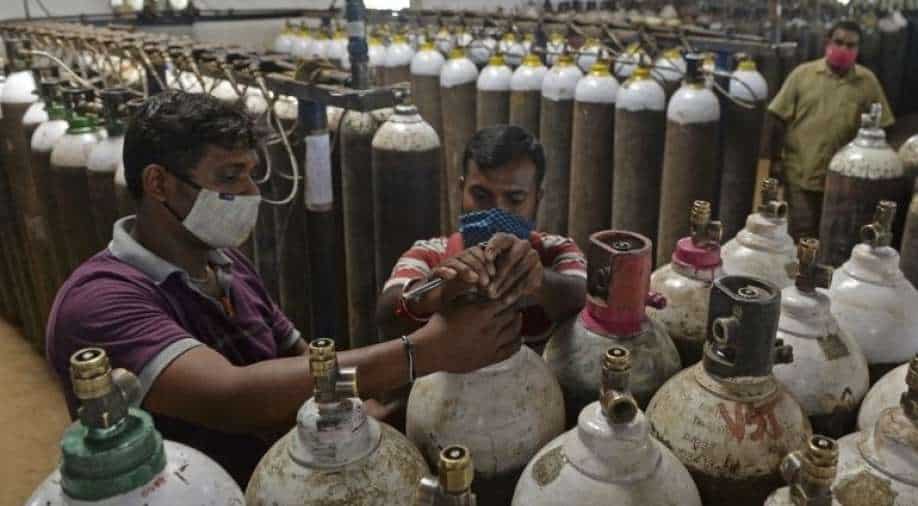 According to an official statement, the ORS has been designed by Lieutenant Commander Mayank Sharma of the Diving School. The system's design has been patented, and an application to this effect has been filed by the Indian Navy on May 13.

Amidst the second wave of COVID-19, the Diving School of the Southern Naval Command of the Indian Navy has conceptualised and designed an Oxygen Recycling System (ORS) to alleviate the existing Oxygen shortages.

According to an official statement, the ORS has been designed by Lieutenant Commander Mayank Sharma of the Diving School. The system's design has been patented, and an application to this effect has been filed by the Indian Navy on May 13.

The Driving School has expertise in this area as the basic concept is used in some of the diving sets used by the school. Earlier, a similar idea on a miniaturised lab model was demonstrated to the Prime Minister during the Combined Commanders Conference at Kevadia on March 6.

According to a press release, the ORS is designed to extend the life of the existing medical oxygen cylinders two to four times, using the fact that only a small percentage of oxygen inhaled by a patient is actually absorbed by the lungs, the rest being exhaled into the atmosphere along with carbon dioxide produced by the body.

The first fully operational prototype of the ORS was produced on April 22 and underwent a series of in-house trials and design improvements at the Southern Naval Command, with third-party observers from ISO-certified firms.

Thereafter, on the directives of NITI Aayog, the system underwent detailed analysis and assessment by a team of specialists at Sree Chitra Tirunal Institute for Medical Sciences and Technology (SCTIMST) at Thiruvananthapuram. The team of specialists at SCTIMST found the concept and design of the Oxygen Recycling System feasible, and also suggested a few additional modifications.

The overall cost of the ORS prototype has been capped at Rs. 10,000 against an envisaged saving of Rs 3,000 per day due to the recycling of O2. Besides substantially enhancing the existing oxygen capacity in the country, the ORS can also be used to extend the life of oxygen cylinders used by mountaineers/ soldiers at High Altitude, for HADR operations and onboard naval ships and submarines.