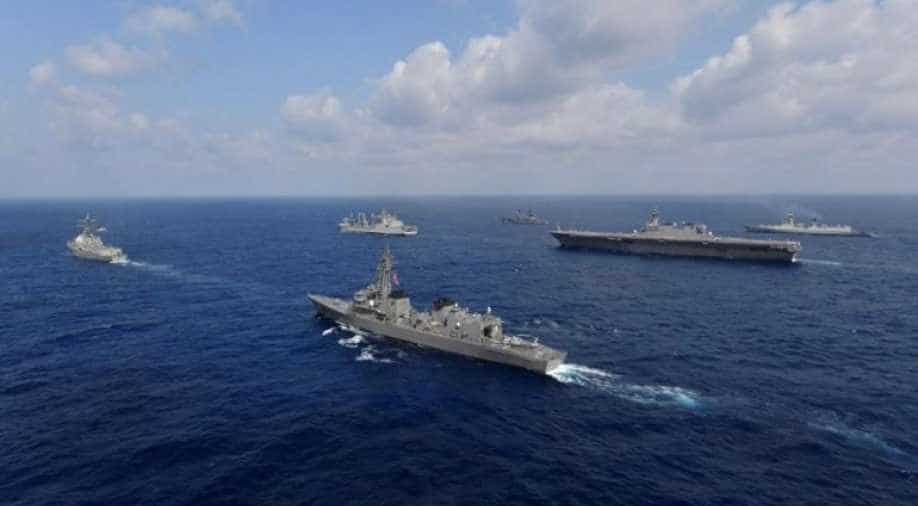 Vessels from the US Navy, Indian Navy, Japan Maritime Self-Defense Force and the Philippine Navy sail in formation at sea Photograph:( Reuters )

In a sign of its growing global outreach, the Indian Navy is associating with 21 countries and 22 multi-national agencies for quick sharing of information related to maritime activities in the Indian Ocean region

In a sign of its growing global outreach, the Indian Navy is associating with 21 countries and 22 multi-national agencies for quick sharing of information related to maritime activities in the Indian Ocean region.

At any given time, the Indian Navy monitors close to 12,000 ships and 300 fishing vessels in the Indian Ocean Region. Apart from that, there are close to 3 lakh Indian fishing vessels operating in the seas and their activities too are observed by the force.

The Indian Ocean Region accounts for 75 per cent of the world`s maritime trade and 50 percent of global consumption passes through it prompting security measures involving multiple countries.

Now, the Indian Navy is able to get real time information through its Information Fusion Centre - Indian Ocean Region.

The force is associated with 21 countries including Australia, France, Italy, Japan, the Maldives, the US, New Zealand, Mauritius, Myanmar and Bangladesh, among others, along with 22 multi-national agencies for quick sharing of information in the Indian Ocean Region.

The International Fusion Centre, located at Gurugram, was started in December 2018 to facilitate maritime information to the member countries.

The Indian Navy has got the go ahead to have white shipping agreements with 36 countries, out of which 22 have been signed and 17 operationalised, sources said.

Earlier this month, the `Malabar` maritime exercise between navies of the Quad or Quadrilateral Coalition - an informal security forum comprising India, the US, Japan and Australia - in Indian Ocean Region was hosted in two phases by Indian Navy in the Bay of Bengal and the Arabian Sea.

This set up is apart from Indian government`s Security and Growth for All in the Region (Sagar) initiative which reiterates India`s position as a dependable partner in Indian Ocean Region with Indian Navy as the principal maritime agency and first responder in the maritime domain.