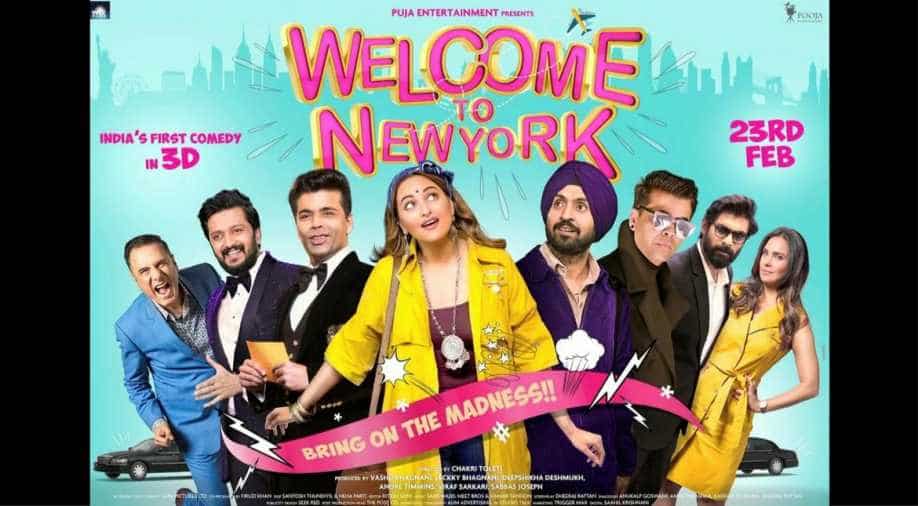 With a long list of stars in the movie, Karan Johar revealed the poster of 'Welcome to New York' a few days back. Photograph:( Twitter )

Innovating with times and keeping it fun all the way, Bollywood makers have now started using different means of announcing their movie.

On Thursday, the announcement of the film "Welcome to New York" took a unique turn when a live chat of the star cast got leaked on social platforms and actors Sonakshi Sinha and Diljit Dosanjh could be seen fighting to stake claim over the film.

The chat also revealed director-producer Karan Johar would be a part of the film and not as a resource behind the camera but would act in the film.

Karan captioned the leak: “And today, all the online goss is about a leaked conversation from a new film. #WelcomeToNewYork http://bit.ly/WelcomeToNewYork-ChatLeaked …@poojafilms @WizFilmsIN.”

And today, all the online goss is about a leaked conversation from a new film. #WelcomeToNewYork https://t.co/7gzbzzACxd@poojafilms @WizFilmsIN

Soon after the chat was 'so-called' leaked, the poster of the film was released:

???? THIS crazy bunch is here with some non stop laughs and endless entertainment! Bring on the madness aur haan... #WelcomeToNewYork ????????@poojafilms @WizFilmsIN pic.twitter.com/w4jtrMixu6

The poster carries the tagline "Bring on the Madness!!” and claims to be India's first comedy in 3D.

According to the bio, "Welcome To New York" is a heartfelt, rib-tickling comedy that tells the story of two unlikely youngsters living in India in search of a better life for themselves. An unexpected trip to New York City sets them off on a comedic adventure that changes their lives forever. It also stars Boman Irani, Lara Dutta, Riteish Deshmukh, Rana Daggubati and probably Salman Khan too.

"Welcome To New York" is directed by Chakri Toleti and is slated for a release on February 23.

Producer and Pooja Films Director Deepshikha Deshmukh said in a statement, “We have a phenomenal star cast and this poster video simply captures the stars having fun and the flavour of the film which is whacky and outright hilarious.”