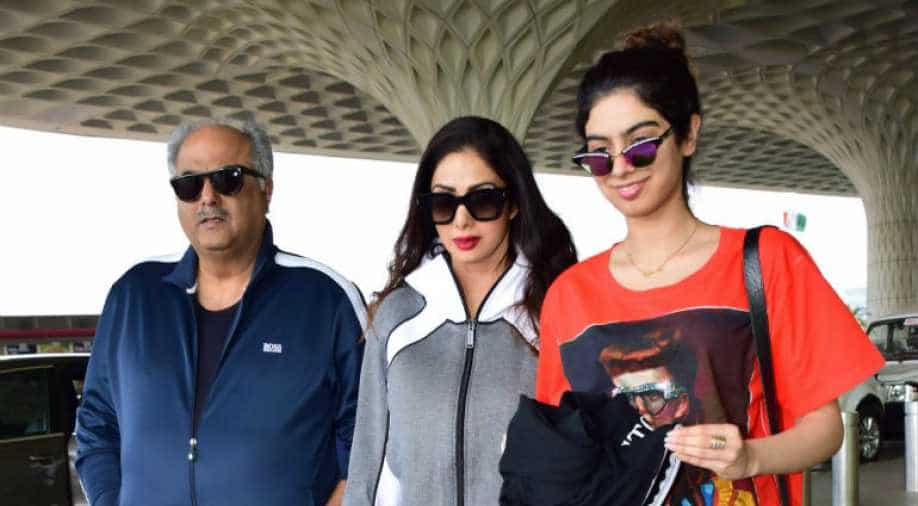 Sridevi, Boney Kapoor, and their younger daughter Khushi were clicked last week at the Mumbai airport as they left for UAE for Mohit Marwah's wedding. Photo by Yogen Shah. Photograph:( WION )

It was Boney Kapoor who found his wife, Sridevi lying unconscious in a bathtub on Saturday night. Earlier reports had suggested that Sridevi's younger daughter Khushi and husband Boney Kapoor were by her side when she breathed her last. But latest reports indicate that Sridevi had stayed back in Dubai post Mohit Marwah's wedding to spent some time with her sister Srilatha.

The actress had checked in at Emirates Tower. Boney who had flown back to Mumbai post the wedding decided to surprise his wife and on Saturday flew back to Dubai.

According to media reports, Sridevi was sleeping when Boney came and woke her up and asked her for dinner. The two chatted for about 15 minutes before Sridevi headed to the bathroom. When she did not come out after 15 minutes and did not respond to Boney, he broke down the bathroom door and found his wife lying in the bathtub, unconscious.

Boney tried to revive her but wasn't able to and called a friend over for help. The actress was rushed to the hospital soon after and pronounced dead at around 9 pm. While reports indicate that the actress suffered a cardiac arrest, there has been no official statement on the matter yet from either her family or the hospital in Dubai where she was taken.

The actress's daughters, Janhvi and Khushi, are at Anil Kapoor's residence since Sunday morning where celebrities have been gathering to offer condolences to the Kapoor family.