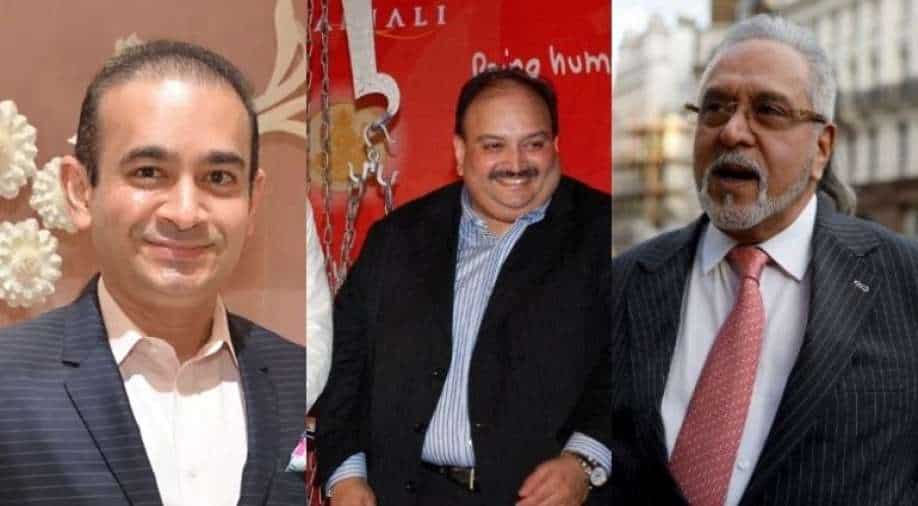 According to the agency, the latest sale proceeds take the total value of recovery to Rs 9,041.5 crore, or 40 per cent of the over Rs 22,000 crore allegedly defrauded by the trio

About 40 per cent of the money lost by banks in alleged frauds perpetrated by fugitive businessmen Nirav Modi, Mehul Choksi and Vijay Mallya has been recovered so far, the Enforcement Directorate (ED) said after the sale of attached shares worth over Rs 5,800 crore on Wednesday.

According to the agency, the latest sale proceeds take the total value of recovery to Rs 9,041.5 crore, or 40 per cent of the over Rs 22,000 crore allegedly defrauded by the trio.

The three, who fled overseas as a probe against them gathered pace, are being investigated by central investigative agencies such as the ED and the Central Bureau of Investigation (CBI) after they were alleged to have cheated banks, and these frauds have been categorised as among the country's biggest criminal loan heist till date.

The central agency gave the low-down on these two cases, the estimated Rs 13,000 crore fraud allegedly carried out by diamond trader Nirav Modi, his uncle Mehul Choksi and others in the Brady House branch of PNB in Mumbai and the about Rs 9,000 crore Kingfisher Airlines fraud triggered by Mallya, in a statement issued here.

It said the three "defrauded" public sector banks by siphoning off the funds through their companies which resulted in a total loss of over Rs 22,000 crore or $ 2,20,000 Million (Rs 22,585.83 crore in definite numbers) to a clutch of banks.

Asked for a comment, Choksi's lawyer Vijay Aggarwal told PTI, "The ED has indeed attached assets much more than the money due to the banks."

The ED, empowered to probe such cases under criminal sections of the Prevention of Money Laundering Act (PMLA), went on to attach and seize total assets worth Rs 18,170.02 crore in these two cases that included Rs 969 crore worth of properties "located" abroad.

On Wednesday, out of these attached assets, the Debts Recovery Tribunal (DRT) on behalf of an SBI-led consortium that lent money to Mallya sold fresh shares worth Rs 5,824.50 crore of United Breweries Limited (UBL), the agency said.

The DRT action came after the ED transferred the shares worth about Rs 6,624 crore of UBL attached by it to the SBI-led consortium on the directions of a special PMLA court that is hearing these cases in Mumbai.

"Further realisation of Rs 800 crore by sale of these shares is expected by June 25," it added.

The banks have earlier "recovered" Rs 1,357 crore by a similar sale of shares in the case against Mallya and his now-defunct Kingfisher Airlines, the ED said.

Another Rs 1,060 crore worth of assets were "restituted" to the banks earlier in the probe against Nirav Modi, they said.

As of date, the ED said, assets worth Rs 9,041.5 crore, "representing 40 per cent of the total loss to the banks, have been handed over to public sector banks."

"Thus, the banks shall be realising total amount of Rs 9,041.5 crore through sale of a part of assets attached/seized by ED under the PMLA," it said.

In addition, official sources said, Rs 329.67 crore has been realised in the government exchequer after Modi's assets were confiscated in July last year after the 50-year-old diamantaire was declared a fugitive economic offender by a special court in Mumbai.

The ED said the probe has "irrevocably proved" that the three used dummy entities controlled by them for rotation and siphoning off the funds provided by the banks.

"The investigators had to pierce through the multi-layered corporate veil to find these assets that were held in exclusive possession."

"It was a myriad web of domestic and international transactions and stashing of assets abroad," a senior officer said.
The ED also got repatriated to the country assets like gold and diamond jewellery (of Modi and Choksi firms) from abroad to ensure they are not disposed off and are available to the banks and the government exchequer for seizure.

The agency said, "a substantial part of these assets were held in the names of dummy entities, trusts, third persons, relatives of these accused and these entities were proxy of the three accused to hold these assets."

It said the extradition of Mallya (65) "has been ordered by the Westminster Magistrates Court and confirmed by the UK High Court."

"Since Mallya has been denied permission to file appeal in the UK Supreme Court, his extradition to India has become final," it added.

It said Modi too has lost his extradition plea and has been in a London jail for the last 2.3 years.

Choksi (62) had mysteriously gone missing on May 23 from Antigua and Barbuda, where he has been staying since 2018 as a citizen, and later surfaced in neighbouring Dominica from where India is trying to get him deported.