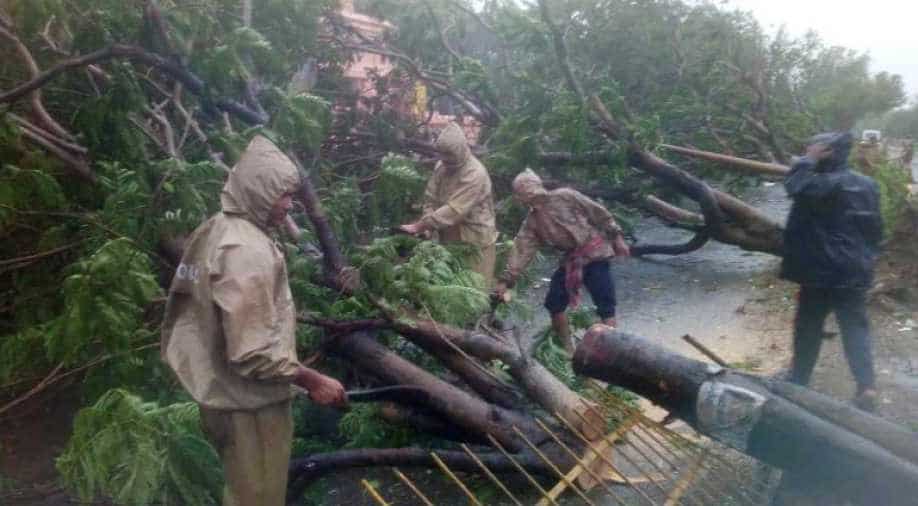 Police personnel of Nayapalli police station clear roads in Bhubaneswar. Several trees have been uprooted in the heavy rain and strong winds due to cyclone Fani. Photograph:( ANI )

Cyclone Fani, which made landfall in Puri district on May 3, killed at least 64 with Puri recording the maximum number of casualties at 39 and left a trail of destruction in the state.

After cyclone Fani hit Odisha coast, a forest department's report brought to the light that around 20 lakh trees uprooted in the area, including the ecologically sensitive varieties of the trees.

"It will take a long time to revive the greenery of these areas just like before the cyclone. It is a challenging task on the part of the forest department not only in terms of spending money for the efforts but also to provide the manpower for the same. The plan should be directed in such a way so that old greenery in Bhubaneswar, Puri, Balukhad and other affected areas will come back," said Bijayshree Routray, Forest and Environment Minister Odisha.

"There has been a proposal for five years and more than 500 crores need to be spent in this regard. But, in effect, it is the question of how the funds will be distributed throughout the year. It also depends on many things - liveability of the saplings, planting and choosing the quality of trees. It will need massive plantation to get back the greenery that we have lost and it may take 20 years for the forest to look like what it was earlier," noted the forest department report.

Cyclone Fani, which made landfall in Puri district on May 3, killed at least 64 with Puri recording the maximum number of casualties at 39 and left a trail of destruction in the state.

Huge numbers of trees were uprooted resulting in disruption of road communication. Khordha and Bhubaneswar city have been severely affected in this regard.