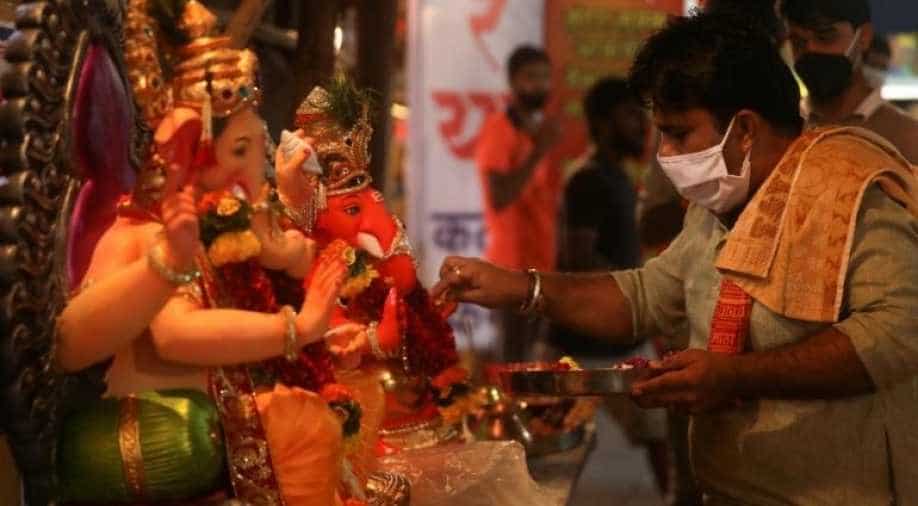 A Hindu priest wearing a protective face mask conducts a puja in front of idols of Hindu God Ganesh, the deity of prosperity, before they can be taken home ahead of the Ganesh Chaturthi festival in Mumbai Photograph:( Reuters )

Most major cities have ordered that effigies of the popular elephant-headed god Ganesha, which can draw thousands of Hindu devotees onto the streets, be shrunk back.

Indian authorities have imposed tough anti-coronavirus restrictions on gatherings and the size of Ganesha elephant god idols for one of the biggest religious festivals of the year that started Saturday.

The 10 days of prayers and family gatherings for Ganesh Chaturthi started under a pandemic cloud with the country closing on three million infections and 56,000 deaths.

Most major cities have ordered that effigies of the popular elephant-headed god Ganesha, which can draw thousands of Hindu devotees onto the streets, be shrunk back.

Traditionally, the idols can tower 30 feet high or more and need dozens of people to carry them but this year authorities said they can be no more than 1.1 metres tall in a bid to cut crowds. An artisan applies finishing touches to an idol of Hindu elephant god Ganesh, the deity of prosperity, at a workshop

In New Delhi, no Ganesha idols will be shown in public while hard-hit Mumbai has cut back access to the seafront to immerse Ganesha figures, usually the highlight of the festival.

Tens of thousands traditionally flock to the beaches on the final day of the festival to immerse elaborately decorated figurines of the deity in the Arabian Sea.

This year, authorities in India's financial capital have constructed hundreds of artificial immersion ponds across the city to stop hordes crowding the waterfront.

Devotees will also be able to leave their elephant idols at collection centres and volunteers will immerse them in the sea.

Authorities want devotees to mark the festival at home, dampening enthusiasm among pandemic-weary locals. Even the idols worshipped at home must be no more than 13 inches.

In a sign of the times one of the rare Ganesha elephants on display sprays sanitizer onto the hands of devotees who come to pray.

Worshippers are barred from making public offerings to the deity and organisers have been ordered to sanitise outdoor marquees several times a day.

Some cities which have seen a surge in coronavirus cases had proposed a complete ban on Ganesha gatherings in public.

But in Bangalore, authorities relented following protests by religious groups. Public displays of the elephant figures will still be restricted with socially distanced followers having to wear masks.