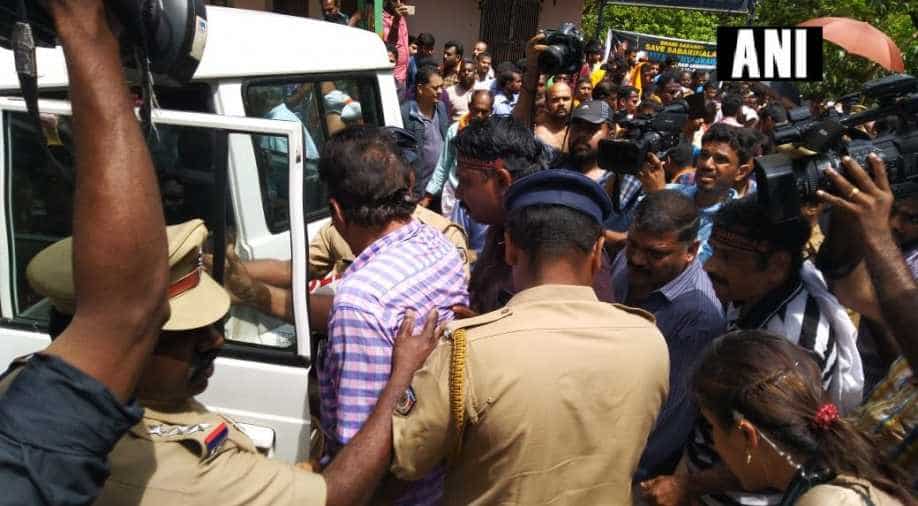 The opposition Congress and BJP Friday hit out at the Left government in Kerala for allegedly extending support to bring women activists to Sabarimala temple, hurting the sentiments of devotees.

They also alleged the police gave one of the women, who climbed to the hill shrine amid heavy security, their official uniform and helmet.

The two women, identified as a journalist from Hyderabad and a Kochi-based activist, trekked Sabarimala and reached a few metres away from the holy 18 steps with police escort but had to return due to massive protest by devotees.

Attacking the CPI(M)-led LDF government on the issue, Congress leader Ramesh Chennithala asked whether the police gave security to the real devotees.

"Has the government taken to the shrine the real devotees? Is the entry of women into the shrine a commando operation? Is this the supreme court order?" he asked.

"The government has extended support to bring activists to Sabarimala, hurting the sentiments of Lord Ayyappa devotees," Chennithala said.

Earlier in the day, Devaswom Minister Kadakampally Surendran admitted that one of the women who trekked to the shrine was an activist and made it clear that holy Sabarimala was not a place to show their strength and activism.

Referring to the massive protest at the temple complex by the devotees and the 'parikarmies', the assistants of the priests, Chennithala said the "illogical" steps taken by the government on the Sabarimala women entry issue had led to this situation.

He also reiterated the UDF stand that the Pinarayi Vijayan government showed "over-enthusiasm" and "hurry" to implement the apex court order permitting women of all age groups into the Lord Ayyappa temple.

The government unilaterally moved forward on the matter without trying for a consensus among stakeholders, he said.

Chennithala also alleged that the BJP-RSS combine was trying to inflame communal passion over the matter.

The police escorted two women to the shrine by making one of them wear police uniform and a helmet, without considering the sentiments of the devotees, he alleged.

A large number of devotees blocked the young women and police team escorting them at Valiya Nadappandhal, the queue complex located a few metres away from the holy 'pathinettam padi' (the 18 sacred steps), leading to the sanctum sanctorum.

Tension was defused after the women agreed to return as the state government made it clear it did not want to take them to the Sannidhanam, the temple complex, by using force against the protesting devotees.