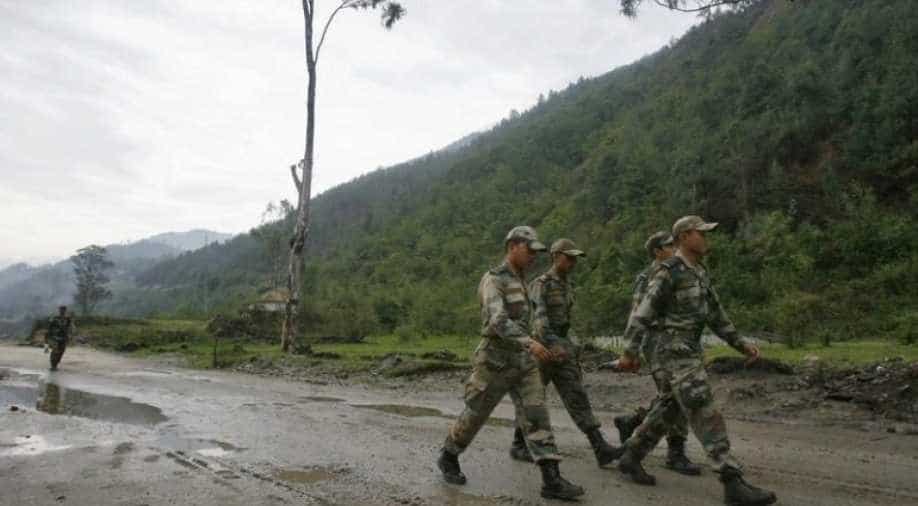 File photo of Army soldiers march near an army base on India's Tezpur-Tawang highway in Arunachal Pradesh May 29, 2012. Photograph:( Reuters )

The general security arrangements on the entire Indo-China border opposite were also reviewed during the meeting.

Arunachal Pradesh Governor Brig (Retd) B D Mishra Monday emphasized on strengthening the coordination between the border state and the Indian Army to reinforce the sense of security among the people and the territorial integrity of the country.

Mishra, who chaired a coordination meeting of the state government and the Army at the Raj Bhawan here, advised regular meetings between the two sides at various levels, a communiqu informed here. The general security arrangements on the entire Indo-China border opposite were also reviewed during the meeting.

Lt General Anil Chauhan GoC Eastern Command and Lt General Shantanu Dayal GoC 4 Corps along with Army officials were present in the meeting in which various security and border infrastructure related issues were discussed. Chauhan apprised the governor of action taken by the Army in coordination with other agencies for maintaining peace and security in the state, the communique said.

The Army Commander assured the governor and the chief minister of assistance by the Army whenever required. Mishra suggested the general officers commanding of the Eastern Command and 4 Corps to enhance the socio-economic activities of the people of the state, it added.

In a separate meeting with Khandu at the Raj Bhawan, the governor discussed the administrative issues and deliberated on removing the hurdles and bottlenecks in the implementation of welfare projects. Issues related to border area development, farmers, agriculture and allied sectors were also discussed in the meeting, the communique added.