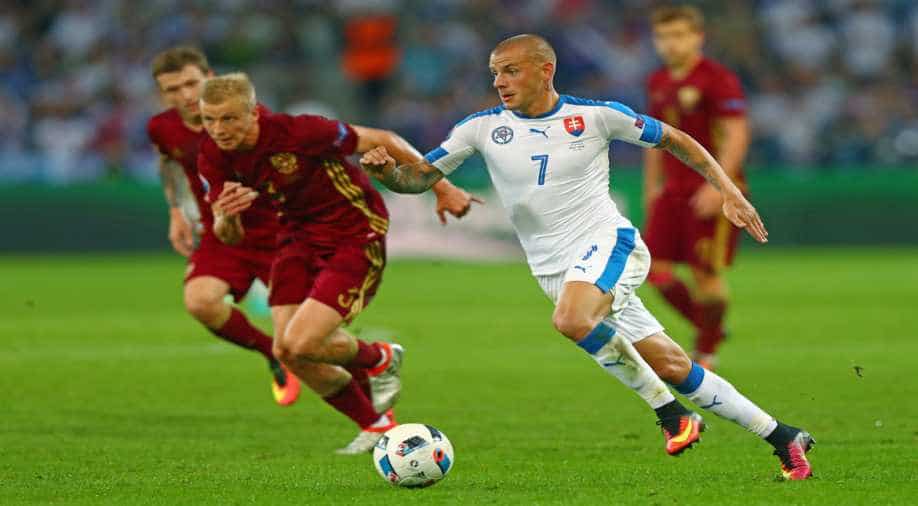 With the opening goal against Russia, Weiss made history by becoming the first ever player based outside Europe to score at the championships since they were first contested in 1960 Photograph:( Getty )

Follow Us
Slovakia forward Vladimir Weiss is backing his country to beat England in their crucial Euro 2016 Group B game. The teams meet on Monday in Saint-Etienne with both sides looking to book a place in the last 16 of the competition.

"We have beaten big teams before and if we play at our best we can beat anyone, even England," said Weiss.

England currently top the group with four points, one point ahead of third-placed Slovakia. A draw could be enough for both teams to progress but a defeat for either team in the high-stakes match could see one of them return home.

The sides will approach the game with confidence having both won their second group matches 2-1 -- England against Wales and Weiss's Slovakia against Russia.

"The win against Russia gives us a lot of confidence going into the last game. We needed a win and we're very happy that we got it. I am sure England have seen our game against Russia and they know we will give it everything to get something from the final game to qualify," he told the website of Qatar's World Cup organising committee, the Supreme Committee for Delivery & Legacy.

Weiss currently plays his team football in Qatar with Al-Gharafa. With the opening goal against Russia, Weiss made history by becoming the first-ever player based outside Europe to score at the championships since they were first contested in 1960.

The 26-year-old former Rangers and Manchester City player said he knew was going to hit the net before he shot.

"Once I turned inside the two defenders, I knew I was going to score. I was already thinking where I would go to celebrate the goal and I went to my parents. I dedicated the goal to my mum, she knew I wasn't happy after the first game. She said my time will come, and it did," he said.
(AFP)