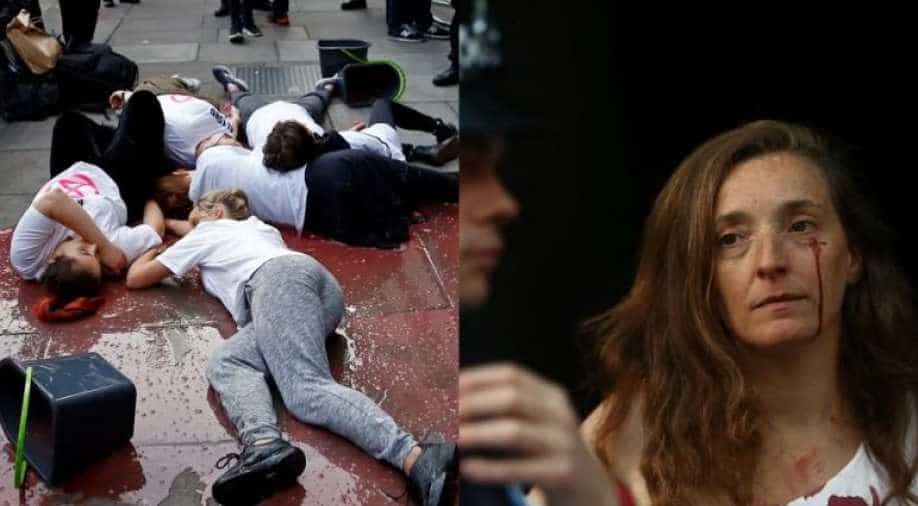 The protest took place before the start of the first fashion show.

Climate activists glued themselves to a door and poured a 'bleeding' red carpet ahead of the opening of London Fashion Week on Friday, seeking to draw attention to the apparel industry’s impact on the environment.

Protesters belonging to the Extinction Rebellion group have vowed to disrupt the five-day event, where luxury brands such as Burberry, Victoria Beckham and Erdem are presenting their spring 2020 womenswear collections.

The group, which has staged numerous protests in recent months calling for action to tackle climate change, had called on the British Fashion Council to cancel the event.
Wearing white dresses with blood-like stains, five protesters glued themselves to the entrance door of the main London Fashion Week building.

Other demonstrators briefly lay on a pool of pink liquid, which they said depicted blood. The protest took place before the start of the first fashion show.

"(The demonstrators) are calling for the fashion industry to tell the truth about its contribution to the climate and ecological crisis," the group said in a phone message to journalists.

Speaking to Reuters, BFC Chief Executive Caroline Rush said demands to cancel London Fashion Week did not "solve the problem in terms of the way the industry needs to address the climate change emergency". "By having a platform like Fashion Week, it's an opportunity to bring designers and the industry together and engage them in the conversation," she said.

"We're looking forward to five days of incredible creativity and we'll be showcasing fantastic businesses, that many of them are already working in terms of how they can address the climate change emergency and what they're doing to address positive change."

Also, there has been hurdles in the form of Brexit that Britain's parliament currently deals with. A survey by the Fashion Roundtable consultancy found 96 percent of British fashion sector professionals backed Britain staying in the European Union in the 2016 referendum, fearing customs bureaucracy and restrictions on the movement of workers.

London Fashion Week is the second leg of a month-long catwalk season that began in New York and will also take place in Milan and Paris.