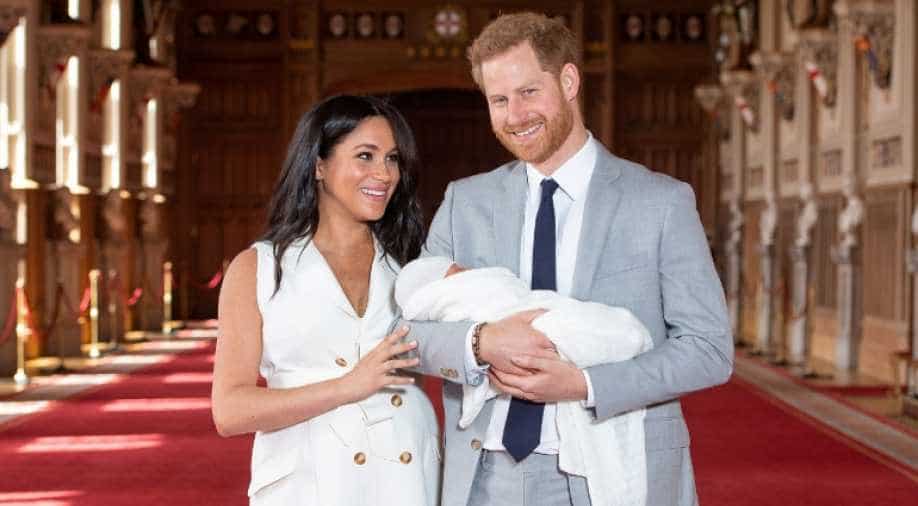 Archie has not received a royal title upon birth due to The Letters Patent, passed by King George V in 1917.

Meghan Markle and Prince Harry recently introduced their son Archie Harrison Mountbatten-Windsor to the world but unlike all his other famous cousins, the baby doesn`t sport a royal title.During a photocall on Wednesday, the Duke and Duchess of Sussex introduced their newborn to the world and soon after sharing a glimpse of their baby, the happy parents revealed his name.

Meghan and Harry have chosen not to use a title for the newborn Archie Harrison Mountbatten-Windsor.

"He will not be styled as Earl of Dumbarton but Master Archie M-W," royal historian Marlene Koenig shared with E! News."But I am not surprised as Harry and Meghan want a `normal` life for their kids," Koenig added.

Royal commentator Victoria Arbiter stated that while many expected the baby to become a prince due to his father`s title, he actually wasn`t eligible for it, reported Fox News."In this instance, the baby wasn`t eligible for a princely title due to the 1917 Letters Patent," Arbiter explained.

"I think most people were expecting the baby to take on the title of earl, but Harry and Meghan have chosen to forgo all titles in an effort to give their child as normal of a life as possible. He is eligible legally to become an earl, but they`ve chosen not to use that," she added.

Archie has not received a royal title upon birth due to The Letters Patent, passed by King George V in 1917. The outlet further shared that Archie`s cousins, Princes George and Louis, as well as Princess Charlotte, were given titles of prince and princess because they are the children of Prince William. William is the son of Charles, the Prince of Wales, also known as the heir to the throne.

Therefore, the only way Harry could receive a title for his son is if his paternal great-grandmother, Queen Elizabeth II, steps in. She can issue an order to give the baby boy and his future siblings the title of prince or princess.

"Technically, Archie would be eligible to become a prince as a grandson of the Sovereign when Charles becomes king," said Arbiter.

However, Arbiter shared that Harry and Meghan wanted their son to have a sense of freedom and that does not come with a royal title."He`s going to be simply known as Master Archie Harrison Mountbatten-Windsor. That gives him a greater chance of a normal life. Who knows what the future holds because one day his grandfather will be king. But it just takes the pressure off. There`s not so much expectation. He gets to be normal," she explained.

The power couple introduced their newborn to the world inside St George`s Hall at Windsor Castle, where they celebrated their wedding reception just a year ago. Meghan gave birth to her and Harry`s first child, on 6th May, in the early hours of the day.