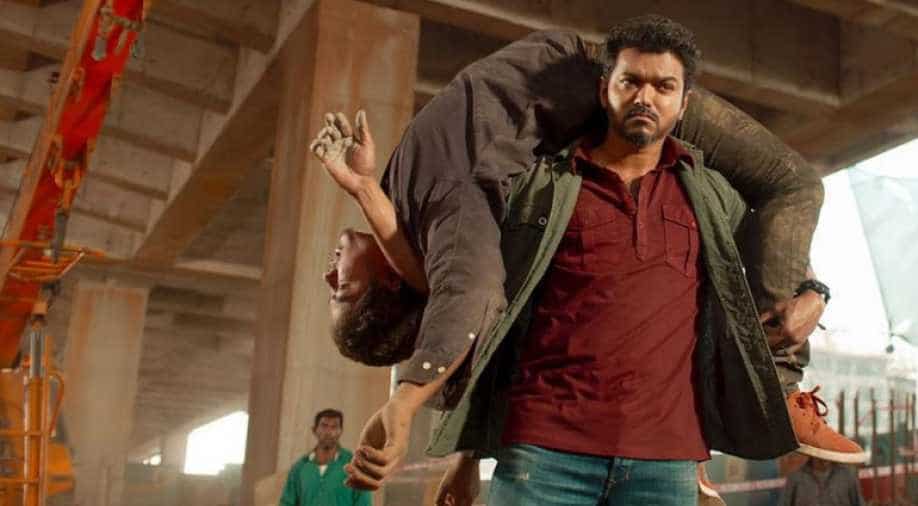 A still from the film 'Sarkar'. Photograph:( Others )

Among others, the AIADMK was furious over a scene in the film in which the director Murugadoss, playing a cameo, flings a mixer-grinder given as a freebie into the fire. "They are showing freebies given by the elected government being burnt. This amounts to indirectly inciting people, and comes under sedition," said state minister CV Shanmugam.

The makers of already-hit film ‘Sarkar’ have given in to the demand of ruling party AIADMK and edited out parts of the movie that allegedly created a controversy in the state of Tamil Nadu. A political thriller starring actor Vijay stoked the wrong emotions allegedly hurting former chief minister J Jayalalithaa, who died in 2016.

Among the changes made, a five-second video cut has been made and audio has been muted at three points. The AIADMK welcomed the filmmakers' decision and also warned the film industry to be "careful" in future.

All this after the film's director AR Murugadoss went to the Madras High Court today for protection from arrest. He tweeted last night that the police allegedly banged on his door when he was not at home. He also applied for anticipatory bail.

The ruling party AIADMK was furious over a scene in the film in which Murugadoss, playing a cameo, flings a mixer-grinder given as a freebie into the fire. They also objected to the screen name of the villain, played by actor Varu Sarathkumar. She plays Komalavaalli, which is the original name of Jayalalithaa.

State minister CV Shanmugam, comparing the screening of 'Sarkar' to "terrorist activity" said, "They are showing freebies given by the elected government being burnt. This amounts to indirectly inciting people, and comes under sedition.”

"AIADMK cannot accept scenes that demean Jayalalithaa. Freebies help to improve the socio-economic status of the state. Even fans of actor Vijay will have freebies given by Jayalalithaa. The film industry should be more careful in future," said minister RB Udhayakumar.

The film was released on Tuesday. AIADMK's protests started a day later.

Meanwhile, the film is pretty big on numbers as it has already toppled Baahubali’s record score as it raked in Rs 100 crore in just two days of releasing in theatres.