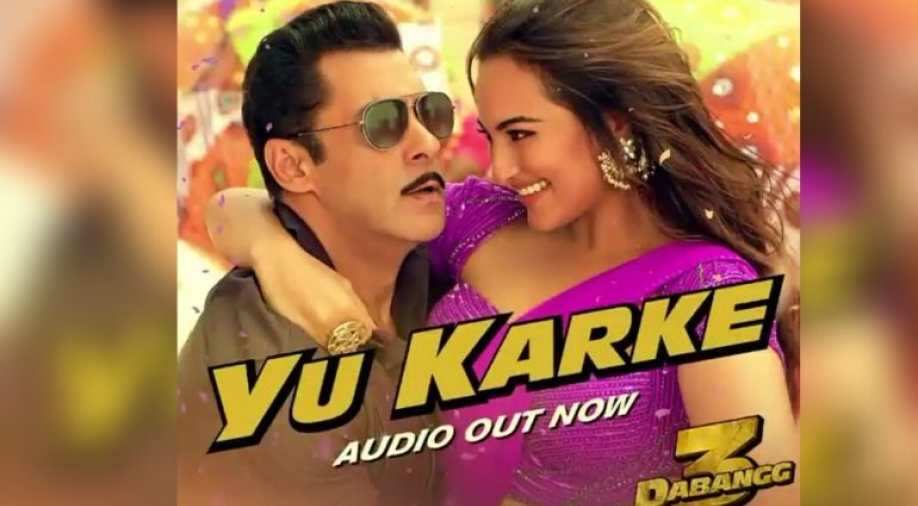 The third in the list 'Yu Karke' seems to be a dance number filmed on the lead pair, Salman and Sonakshi.

Taking the curiosity of their fans to the next level, makers of 'Dabangg 3' dropped yet another track on Saturday, sung by none other than the very famous 'Chulbul Pandey' Salman Khan! The third in the list 'Yu Karke' seems to be a dance number filmed on the lead pair, Salman and Sonakshi.

The poster of the song features the two hugging close where Salman has donned his usual Chulbul Pandey avatar, while Sonakshi is seen draped in a bright pink sari paired with a shimmery blouse. Watch Dabangg 3' trailer: Salman Khan is back to settle some old score.

Payal Dev has sung the track with the 'Dabangg' actor. The music has been given by Sajid-Wajid and lyrics have been penned by Danish Sabri. Sharing the foot-tapping song on her Twitter handle, the 'Mission Mangal' star wrote, "Aa gaya hai Dabangg 3 ka naya song 'Yu Karke', sabke favorite supercop Chulbul Pandey ki aawaaz mein #YuKarkeSong".

Prior to its release, the makers have shared the love anthem 'Naina Lade' and the film's title track. The third installment in the 'Dabangg' franchise will see Salman opposite Sonakshi and veteran actor Mahesh Mamnjarekar's daughter, Saiee Manjarekar. The movie is slated to release on December 20.