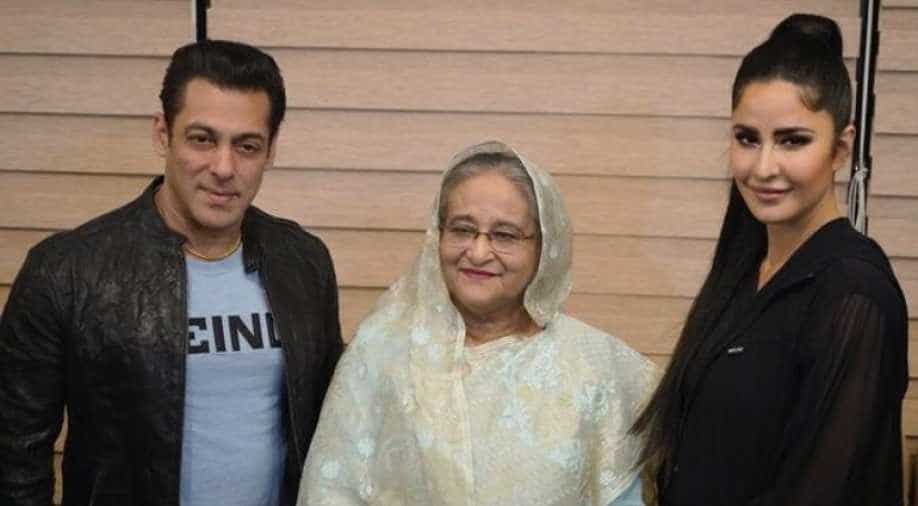 The two actors performed at the inauguration ceremony of Bangladesh Premier League (BBPL) in the country.

The `Dabangg 3` actor Salman Khan shared the picture along with Sheikh Hasina and `Ek Tha Tiger` co-star Katrina Kaif on Instagram on Monday.

The star captioned the picture as, "Katrina and I, with the Hon. Prime Minister Sheikh Hasina.. it was a pleasure and honor to have met such a beautiful lady . . . @katrinakaif."

Katrina and I, with the Hon. Prime Minister Sheikh Hasina.. it was a pleasure and honour to have met such a beautiful lady . . . pic.twitter.com/bpJcRYoO3G

The two performed at the inauguration ceremony of Bangladesh Premier League (BBPL) in the country.

On the work front, the 53-year-old star who was last seen in `Bharat` alongside Katrina Kaif, will next be seen in much-anticipated action thriller `Dabangg 3` In the movie, Salman Khan will be seen alongside Sonakshi Sinha and veteran actor Mahesh Mamnjarekar`s daughter, Saiee Manjarekar.

Helmed by Prabhudeva, the movie is slated to release on December 20. Salman Khan has also started shooting for his upcoming action-packed movie ` `Radhe Your Most Wanted Bhai`.

The movie will be directed by Prabhu Deva under the banner `Salman Khan Films`. The movie also features Disha Patani, Randeep Hooda and Jackie Shroff.

The movies will hit the silver screens releasing next year on Eid.