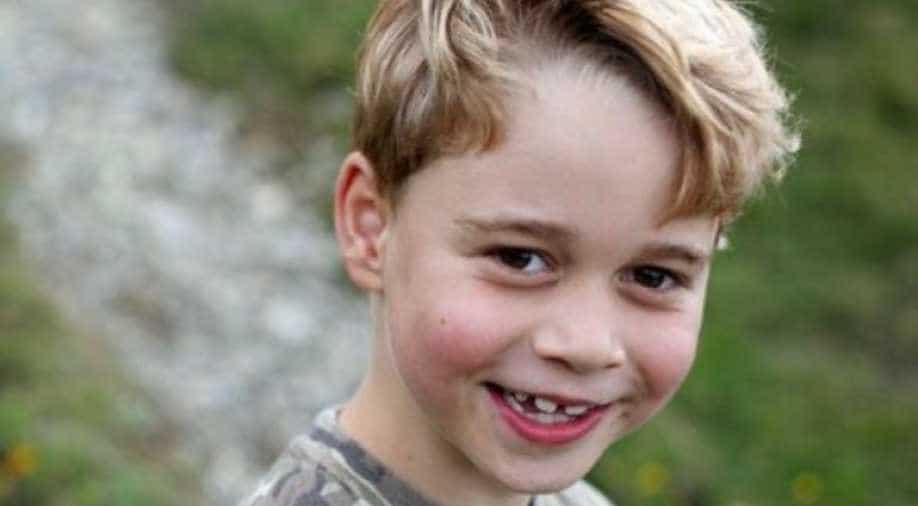 The photos, taken earlier this month by George's mother Kate Middleton were issued by Kensington Palace late on Tuesday

Britain`s Prince George, third in line to the throne after his grandfather Prince Charles and father Prince William, was shown flashing a gap-toothed smile in two photos released to mark his seventh birthday.

The photos, taken earlier this month by his mother Kate, officially known as the Duchess of Cambridge, were issued by Kensington Palace late on Tuesday, the night before the young prince`s birthday.

William and Kate`s three children are rarely seen in public and few photographs of them are released, but it has become a tradition for snapshots taken by Kate to be published on special occasions.

"The Duke and Duchess of Cambridge are delighted to share two new photographs of Prince George ahead of his seventh birthday tomorrow," Kensington Palace said in a statement. It did not say where the photos were taken.

One showed George dressed in a dark green polo shirt, his hair neatly brushed, while in the other he wore a t-shirt with a camouflage pattern and his hair was tousled. He appeared to have lost one or more of his milk teeth.

The Duke and Duchess of Cambridge “are delighted to share” two new photographs of Prince George ahead of his seventh birthday tomorrow 🎂. The photographs were taken by Kate earlier this month. pic.twitter.com/h0sVc1STnW

Sharing a 📸 taken by The Duchess ahead of Prince George’s seventh birthday tomorrow! 🎈 pic.twitter.com/GLPBoVsuYZ

Prince George Alexander Louis of Cambridge was born in the private Lindo Wing of St Mary`s Hospital in London in July 2013 and made his first public appearance a day later, when his parents stood on the hospital steps in front of a huge crowd of photographers and camera crews.

As Britain takes its first steps out of COVID-19 lockdown, and with holiday options limited, George is expected to spend his birthday at home. Last year, he celebrated his big day on vacation with his family on the Caribbean island of Mustique.

George is the eldest of the Cambridges` three children. Sister Charlotte is 5 and brother Louis is 2.