On his birthday, Sanjay Dutt shares the teaser trailer of his next 'Prasthanam' 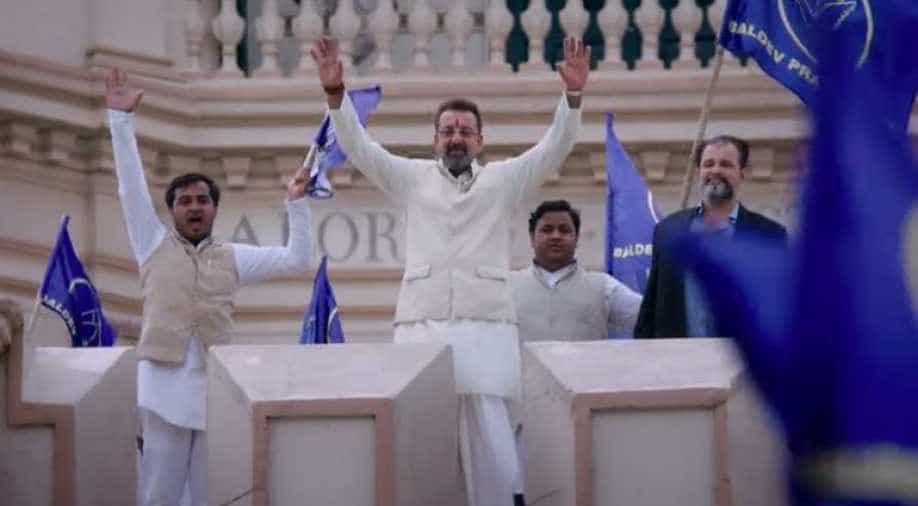 A still from the teaser of 'Prasthanam'. (Youtube screen grab) Photograph:( Others )

Celebrations turned double for Bollywood`s `Khalnayak` Sanjay Dutt who revealed the teaser of his forthcoming Hindi remake of Telugu film `Prasthanam` on his birthday.

As Sanjay Dutt turned 60 on Monday, the actor shared glimpses of his upcoming projects. In the morning, producer Farhan Akhtar shared the actor's look from 'KGF 2' and later in teh noon, Dutt shared the teaser trailer of his new film, 'Prasthanam'. Also see: Inside Sanjay Dutt's 60th birthday bash

The actor shared the one minute 18 seconds teaser which seems to be an epic political drama set in contemporary times.

The teaser opens up with Sanjay`s voice which says "Agar haq doge toh Ramayan shuru hogi, aur agar chhinoge toh Mahabharat (If you give us the right, there will be Ramayan; if you snatch it away from us, then Mahabharat)," followed by a group of people conducting a rally on the streets.

In one of the scenes, Sanjay can be seen standing on top of a building with his fellow supporters and companions to address a rally.
In a montage of images from the teaser--viewers can see Manisha Koirala, Chunky Pandey, Jackie Shroff, Ali Faizal, and Amyra Dastur appear through it in a never seen before avatar.The `Munna Bhai M.B.B.S` star who can be seen donning a black kurta and wearing a red tika in the teaser, is giving us major `Vaastav` feels.

Witness the war for power with #Prasthanam! Proudly presenting the #PrasthanamTeaser - https://t.co/6GZOMwVre8

The teaser also states that the film is a "war for the legacy which takes on loyalty and integrity."The actor even shared the trailer on his Twitter handle.

`Prasthanam` was a 2010 Telugu political thriller, which starred Sharwanand, Saikumar, Sundeep Kishan and Ruby Parihar.
The film produced by Maanayata Dutt has been directed by Deva Kutta, who directed the original one as well.

Sanjay will soon be seen in Mahesh Bhatt`s `Sadak 2`. The actor was last seen in `Kalank,` a period drama set in pre-independent India.The film is slated to hit the theatres on September 20.