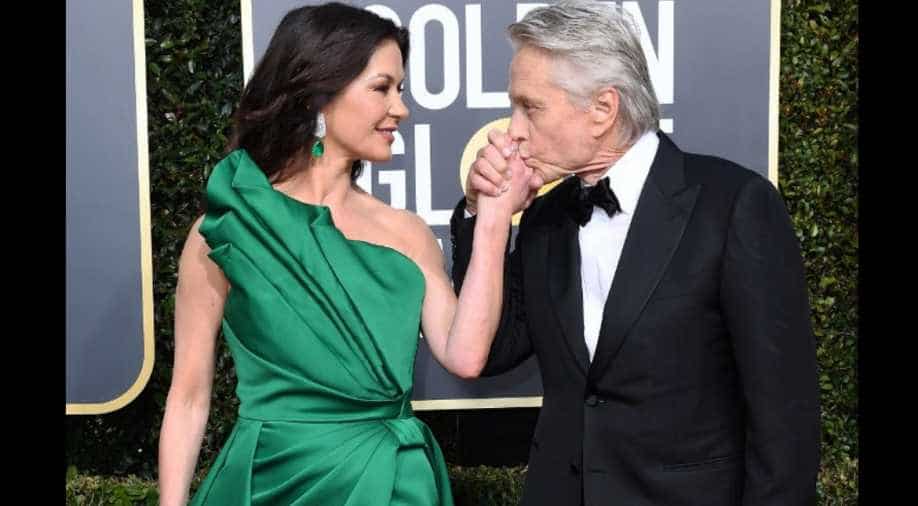 Hollywood star Michael Douglas and wife Catherine Zeta-Jones recently celebrated their 20th wedding anniversary, and to mark the occasion, Douglas, shared an adorable audio message on Instagram detailing how he met her. According to Fox News, it all began when he attended a screening of the movie, `The Mask of Zorro; one of Zeta-Jones` breakout roles.

The 76-year-old actor recounted," I`m watching this movie, I go, `Wow, who is this girl, she`s incredible,`" Douglas recounted, and his friends told him about the actor who was then an up-and-comer.

He recalled, "A month later, I was at the Deauville Film Festival. ... I see on the schedule that the next day at the festival, they`re going to have `Zorro` there. So I asked my assistant: `Can you find out if Catherine Zeta-Jones is going to be here at the festival and if she`s coming alone? And if she is, can I have a drink with her?`"The Oscar winner`s assistant came through and set up a rendezvous for the two."The next day, she arrives with Antonio Banderas and Melanie Griffith, and I have a drink with her and it was everything I hoped for, then she invited me to dinner with her company, I`m thinking, `I`m looking good, this is looking good.`"After dinner, the 51-year-old actor Zeta-Jones had to hurry off to another engagement, but Douglas told her that he`d be at the bar later if she wanted to join him again.

The `Ant-Man` actor reminisced,"Sure enough, I must have been batting one thousand, because, after the movie, I`m sitting at the bar, and like `Laurence of Arabia,` this mirage comes through the lobby and it`s Catherine Zeta-Jones."As per Fox News, the two enjoyed a bit more time together before Douglas hit Zeta-Jones with a bold line.

"I`m going to be the father of your children," he told her. Douglas remembered, "And she left. She left early the next morning and I thought I completely had blown it.""She looked at me and she said, `I`ve heard a lot about you, I`ve heard a lot about you, I guess it`s all true good night.`"All hope was not lost, however, as they eventually "made contact" again, and, as Douglas put it, "the rest is history."

The couple married in 2000 and now share two children: 20-year-old Dylan, and 17-year-old Carys. Douglas also has a 41-year-old son, Cameron, from a previous marriage.