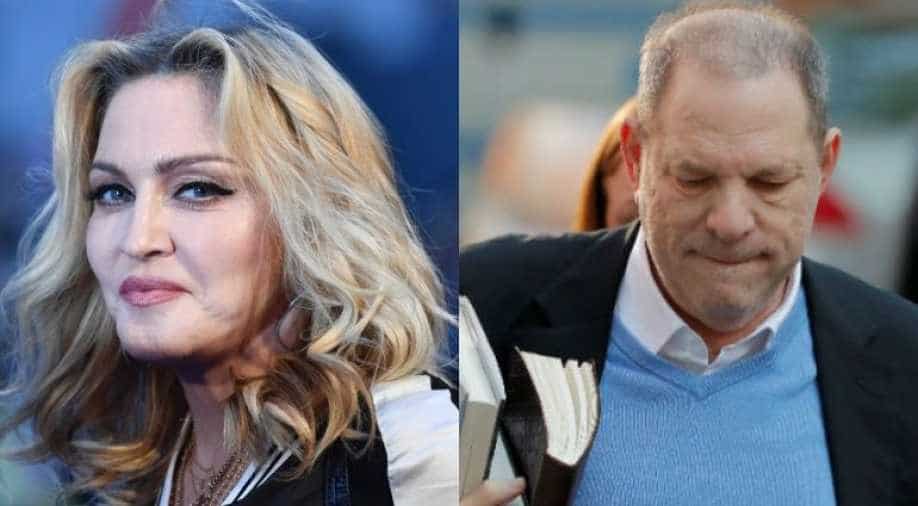 The singer though did not want to speak up or be a part of Times Up movement as she added, "I wasn`t cheering from the rafters because I`m never going to cheer for someone`s demise."

Pop queen Madonna's name can now be added to the long list of women who were sexually harassed by Hollywood mogul Harvey Weinstein.
In a tell-all interview to New York Times, the singer has for the first time opened up about Weinstein and stated that he "crossed lines and boundaries" with her and was "incredibly sexually flirtatious and forward."

"Harvey crossed lines and boundaries and was incredibly sexually flirtatious and forward with me when we were working together. He was married at the time, and I certainly wasn`t interested," she revealed.

Madonna also stated that she knew that Weinstein acted that way with other women in the film business too. "I was aware that he did the same with a lot of other women that I knew in the business. And we were all, `Harvey gets to do that because he`s got so much power and he`s so successful and his movies do so well and everybody wants to work with him, so you have to put up with it.` So that was it," she added.

Talking about Weinstein`s downfall, Madonna shared, "So when it happened, I was really like, `Finally.` Also see: The Weinstein Affair: 10 key moments in a global fallout

The singer though did not want to speak up or be a part of Times Up movement as she added, "I wasn`t cheering from the rafters because I`m never going to cheer for someone`s demise. I don`t think that`s good karma anyway. But it was good that somebody who had been abusing his power for so many years was called out and held accountable."

Weinstein, who has been accused of nearly 30 years of sexual misconduct by several women, was kicked out of the Academy of Motion Picture Arts and Sciences in October 2017 following a New York Times article that chronicled allegations against the producer.

Weinstein has repeatedly denied all the allegations levelled against him.

A few weeks ago, it was reported that Weinstein had reached a tentative USD 44 million settlement to resolve lawsuits filed by women who accused him of sexual misconduct.

The movie mogul had also reached a tentative deal with creditors of his former studio The Weinstein Co. (TWC) and the New York attorney general.In September this year, Weinstein will go on trial in New York on charges of raping an unidentified female friend in his Manhattan hotel room in 2013 and performing a forcible sex act on another woman in 2006.

More than 80 women, including actors Angelina Jolie, Gwyneth Paltrow, and Rose McGowan have opened up about similar stories against Weinstein. Some accused him of using physical force to compel them to have intercourse, while others said he tried to exchange parts in movies for sex or threatened to ruin their careers if they did not comply with him.