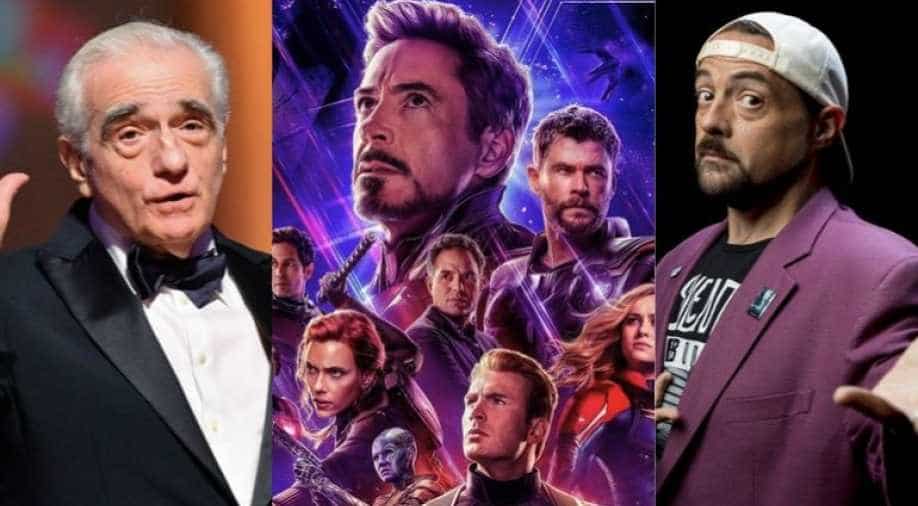 Martin Scorsese recent comment on Marvel movies seem to have divided Hollywood. Scorsese had termed the superhero films as "not cinema".

Martin Scorsese recent comment on Marvel movies seem to have divided Hollywood. Scorsese had termed the superhero films as "not cinema". While some stars including Jennifer Aniston seemed to have echoed the legendary filmmaker's thoughts, others have strong disagreed to his opinion.

A number of stars called out Scorsese for his comments and actor-director Kevin Smith is the latest one to offer his perspective on the ongoing controversy.

Smith defended the superhero flicks after they came in for harsh criticism from the revered director, reported The Hollywood Reporter.
Smith attended a star-studded screening of his latest outing `Jay and Silent Bob Reboot` in Hollywood sporting a late comic book writer Stan Lee T-shirt. Smith, a comic book fan, who has worked on a few film and TV adaptations, was aware of the recent digs that Scorsese took at Marvel movies.

He defended the comic book movies while also taking time to praise Scorsese`s work."Martin Scorsese is a genius. But to be fair, my entire film career -- even prior to my film career -- he`s been pretty much saying the same thing about action movies," Smith told the outlet outside the TCL Chinese Theatre.

Smith said that Scorsese "practically invented cinema," so he respected his opinion while fundamentally disagreeing with it."For my money, I think Martin Scorsese made the biggest superhero movie ever, which was The Last Temptation of Christ," Smith said."Don`t get much bigger of a superhero than Jesus. He beats Superman and [Robert] Downey [Jr.] every time, so maybe Martin is bending on that territory," he added.

Smith also said that he feels the ace director never had an emotional connection to comic books in general. The star noted, "My feeling is, Martin Scorsese never sat in a movie theater with his dad and watched the movies of Steven Spielberg in the early `80s or George Lucas in the late `70s. He didn`t feel that sense of magic and wonder."

For several fans, including Smith, comic book-based movies are more than the story on the screen, they are a time machine. "I can still step into one of those comic book movies, divorce myself of that fact that I do this for a living, release, and my dead dad is back for a minute, for two hours. And it`s personal for a lot of the audience. You know, and we`re not arguing whether or not it counts as cinema," Smith explained.

Smith also reiterated that he had no interest in getting into an argument with Scorsese over the definition of cinema. "I guarantee you there`s something he enjoyed with his parents, like a musical -- I bet you some cats would say, `A musical is not really cinema,` but Martin Scorsese grew up on musicals, and I bet they mean a lot to him," Smith said.

He concluded by adding that Marvel movies "are cinema."

Scorsese made headlines weeks back when he told Empire that Marvel films are, in his opinion, "not cinema" and compared them to "theme parks." The Oscar-winning director doubled down on the comments shortly after and said at the BFI London Film Festival, "It`s not cinema, it`s something else. We shouldn`t be invaded by it. We need cinemas to step up and show films that are narrative films."
He has been under fire for the comments from not only fans but also actors and filmmakers who have worked on Marvel films.