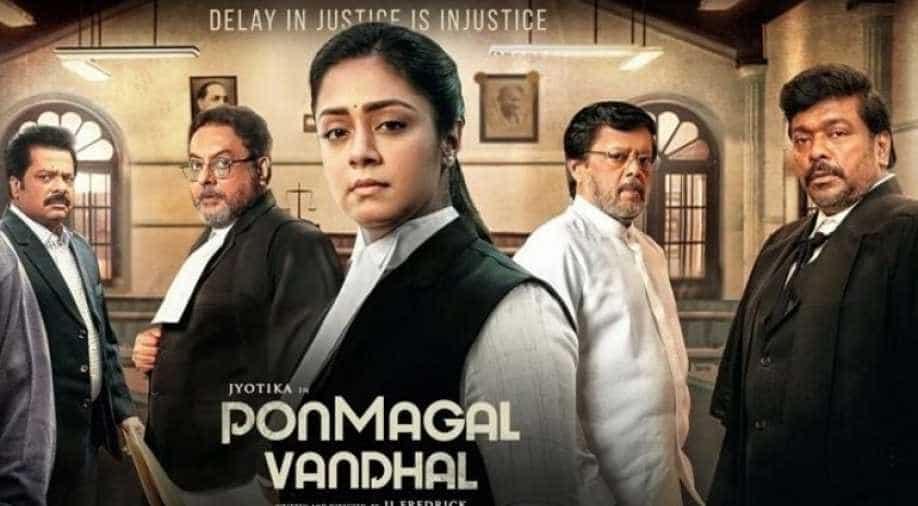 "OTT is a big boon for small films," says Jyothika whose new film is headed for a direct digital release.

The nationwide lockdown has led to new changes in all spheres of life. In cinema, several filmmakers have now opted for a direct digital release of their films as uncertainty over the future of cinema halls looms large.

Tamil film 'Ponmagal Vandhal' starring Jyothika in the lead role is heading for a digital premiere on digital space and the actress feels that the move will boost regional cinema.

"Definitely, it will be a boost to the regional cinema and content-oriented films. There`s a lot more we will get to see right now and we will get to know what is the flavour of every state. So, it is going to be a huge step and big change in the way we see films," Jyothika told a news agency.

'Ponmagal Vandhal' is a legal drama that will have its world premiere on May 29. It is written and directed by JJ Fredrick, and produced by Jyotika`s husband, Tamil superstar Suriya, along with Rajsekar Karpoorasundarapandian.

With the multiplexes remaining shut, the streaming platform Amazon Prime Video is going all out in a bid to revolutionize the way we might watch films in the future. The streaming portal have announced seven films straight-to-OTT release.
Jyothika though feels that the thrill of watching a film in a theatre is unmatched. "As for producers and actors, the theatre is an emotion for us. We have grown up seeing films in theatres, of actors we have been fans of. Today, when we do a film, people clap, applaud and whistle. That`s not matchable at all," she said.

"But saying that, small films need a wider reach. We also need the film to be seen. I have done seven to eight films in the last four or five years, I do see a very small audience going to watch it. It`s overwhelming to see hitting 10 million views in two days, and the kind of response we are getting. It`s a big boon. OTT is a big boon for small films," she added.

"I think the utmost amount of hard work is now having a platform all over India and moreover in the South. One thing which is not picking up is as woman are ageing, we still don`t have more of 35-plus heroines, who are ruling the roost. There are more films made with the younger ones," she observed.