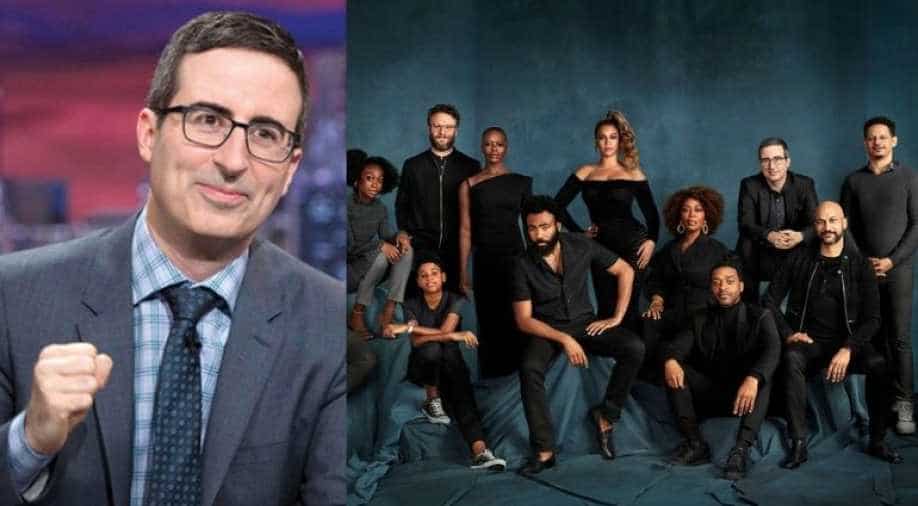 John Oliver has revealed that Beyonce was not present on the day the cast photo of 'The Lion King' was shot. Photograph:( Others )

There have been speculations about Beyonce being photoshopped into the cast photo of `The Lion King`.

Addressing rumours that singer Beyonce had been photoshopped into the cast photo of `The Lion King`, John Oliver, who dubbed Zazu in the film, revealed that indeed she was not there, during a recent appearance on `The Late Show with Stephen Colbert` show.

The host of the show, Stephen Colbert asked Oliver, "There`s a lot of speculation here that everybody else in this photo is actually there, except not Beyonce. People are speculating she was photoshopped in. And you`re right next to her -- can you tell us whether she was there?"

"She wasn`t there," Oliver answered adding, "I think almost everybody else was there."

"I remember Chiwetel [Ejiofor, who voices Scar]- we were setting up the shot and Chiwetel was sitting in the front and he said, `You need to be careful where your foot is,` " Oliver recalled. "I looked down and there was just this piece of tape on the floor with Beyonce`s name written on it."

"Just the future presence of Beyonce was so intimidating -- if you look at my face in there, I look really intimidated," he continued. "That`s because what I`m doing is imagining that I am about to be put into a photo with Beyonce one day. And that was nerve-wracking enough."

Colbert also pointed out the sizable gap between Oliver and Beyonce in the photo. On which Oliver jokingly replied, "It`s only appropriate that there`s a significant gap between me and the actual queen." With the screenplay written by Jeff Nathanson and songs by legends like Elton John and Time Rice, the movie is directed by Jon Favreau.The Disney film features Donald Glover lending his voice to Simba as John Oliver dubs Zazu and Seth Rogen lends his voice to Pumbaa. Beyonce dubbed for Nala, Simba`s bae. The film had hit the theatres on July 19 in English, Hindi, Tamil, and Telugu.

Deepika Padukone, Sara Ali Khan leave Goa for Mumbai, to appear in front of NCB in the coming days