'Fantastic Beasts: The Secrets of Dumbledore' trailer gives a glimpse of an impending war, watch 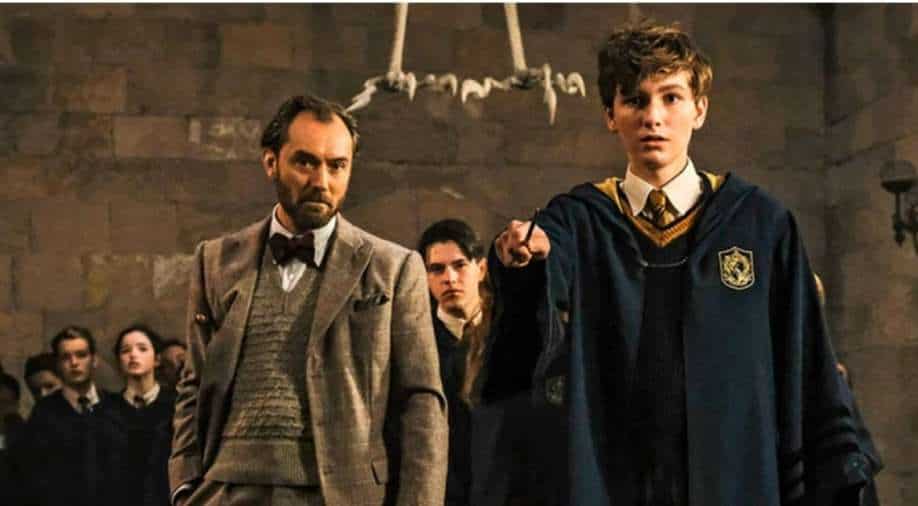 A still from 'Fantastic Beasts: The Secret of Dumbledore' Photograph:( Twitter )

The trailer also gives the creator of the series JK Rowling credit for the story. Rowling created the Fantastic Beasts series as a prequel of sorts to the popular Harry Potter series.

Art imitates life, they say and so the story of 'Fantastic Beasts: The Secrets of Dumbledore' seems to be taking inspiration from reality it seems. The trailer of the film was unveiled on Monday and it looks like Dumbledore and the wizarding world is all set to fight a war waged by his former friend and now arch-rival Grindelwald against the Muggles.

Right at the beginning of the trailer Grindelwald(Mads Mikkelsen) wages war against the Muggles and it is now up to Professor Albus Dumbledore(Jude Law) to stop it. However due to a blood pact between the pair made years ago to never fight each other, Dumbledore has to mobilize a force led by Newt Scamander (Eddie Redmayne).

Meanwhile, danger also lurks with Credence Barebone (Ezra Miller), whose real identity was claimed by Grindelwald in the franchise’s second instalment to be Aurelius Dumbledore.

The trailer also gives the creator of the series JK Rowling credit for the story. Rowling created the Fantastic Beasts series as a prequel of sorts to the popular Harry Potter series. Rowling was not part of the reunion special that aired on HBO Max on December 21 to celebrate the 20 years of 'The Harry Potter' movies. The author was kept away perhaps as a response to her 2020 comment on the LGBTQ community which many felt was transphobic.

In the nearly three-minute-long, trailer of the third Fantastic Beasts goes back to the 'Harry Potter movies' where an older Dumbledore- as seen in the Harry Potter series- is seen at Hogwarts. The trailer also gives a glimpse of Room of Requirement and the golden snitch notable from Quidditch.

David Yates returns to the helm, having previously directed 'Fantastic Beasts and 'Where to Find Them' (2016) and 'The Crimes of Grindelwald' (2018). Yates also helmed the last four films in the Harry Potter franchise.

'Secrets of Dumbledore' will release worldwide in cinemas on April 15.