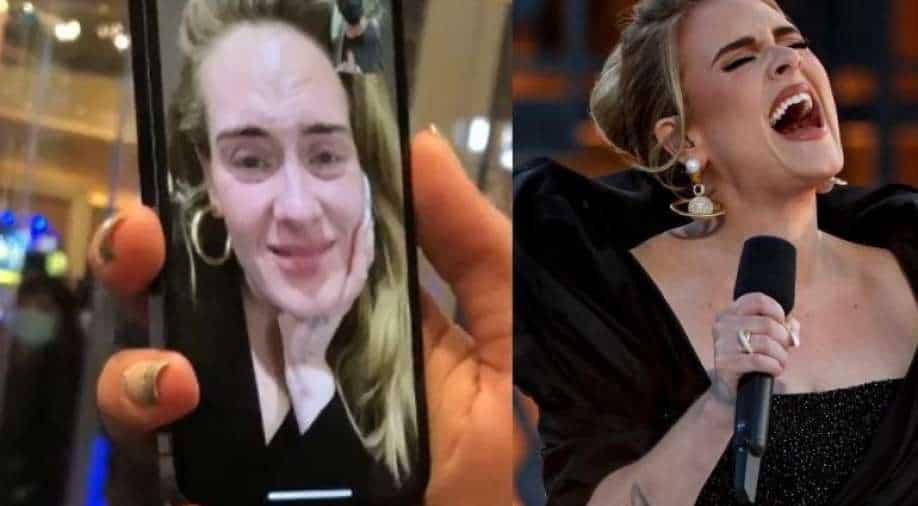 Several fans who chatted with Adele over a video call shared their moment of happiness on their social media accounts.

Adele issued a tearful apology to her fans on Thursday after she announced she had been forced to reschedule her highly-anticipated Las Vegas residency, and now the singer is doing the FaceTime call with some of her die-hard fans who were in the city for the show.

The 'Easy on Me' singer chatted with some of her fans gathered at the Colosseum at Caesars Palace, where her first show was scheduled to take place on Friday.

Adele stunned fans who were disappointed after the show was abruptly cancelled and personally apologised to them via video call.

''On the casino floor Friday night, some disappointed ticketholders were being handed a phone, apparently by someone from Adele’s management team, to have FaceTime chats with the singer, individually or in groups,'' Variety reported.

Several fans who chatted with the Grammy-winning singer over a video call shared their moment of happiness on their social media accounts.
One Instagram user shared a video on his Instagram Story in which he was seen “forgiving” Adele for putting the shows off, “I really don’t mind coming back from Mexico,” he told her.

Watch: The 'Ice Age' makers on creating part 6 of the hit franchise

“I’m thankful for you being so graceful to me. I really appreciate that,” she responded. “That’s my manager right next to you… When you come back, whenever that is, we’ll do a meet-and-greet for free.”

Another fan named Dominic Crisonino, who flew into Las Vegas from New York, also shared a video of his FaceTime chat with Adele.  Sharing the same on his Instagram, he captioned the video as, "I literally was just on FaceTime with @adele!! WHAT IS LIFE."

UPDATE: Adele just facetimed her and told her she’s gonna cover all her costs, fly her out to the next concert, she’s gonna get to gift her the shirt, and they’re gonna drink wine together. SHE WON!!!! pic.twitter.com/8QkkIjj8J8

Adele also apologized to fans with a note at her merchandise store in Caesars Palace, The message read, "Hi guys! I'm so upset to not be with you tonight. But I know some of you are here already so please hang out and look at the outfits, take pics of anything you want. Of yourselves and with each other!"

Also read: BTS members to not be exempted from military service?

Adele sang “All I Ask” with fans via FaceTime. #Adele #WeekendsWithAdele pic.twitter.com/vlwTCpovQ3

The note continued, "There's people in the room I worked with on the store and the merch. There's members of my management in here too to show you around. And any of you in here who were due to come to the shows this weekend can have a gift on me! I'm so sorry again."

Earlier, Adele announced that she's pushing her residency in an emotional video posted to Instagram Thursday.

All dates will be rescheduled
More info coming soon
💔 pic.twitter.com/k0A4lXhW5l

"Hi, listen I'm so sorry but my show ain't ready. We tried absolutely everything that we can to put it together in time and for it to be good enough for you but we've been absolutely destroyed by delivery delays and COVID. Half my crew, half my team are down with COVID — they still are," Adele said.