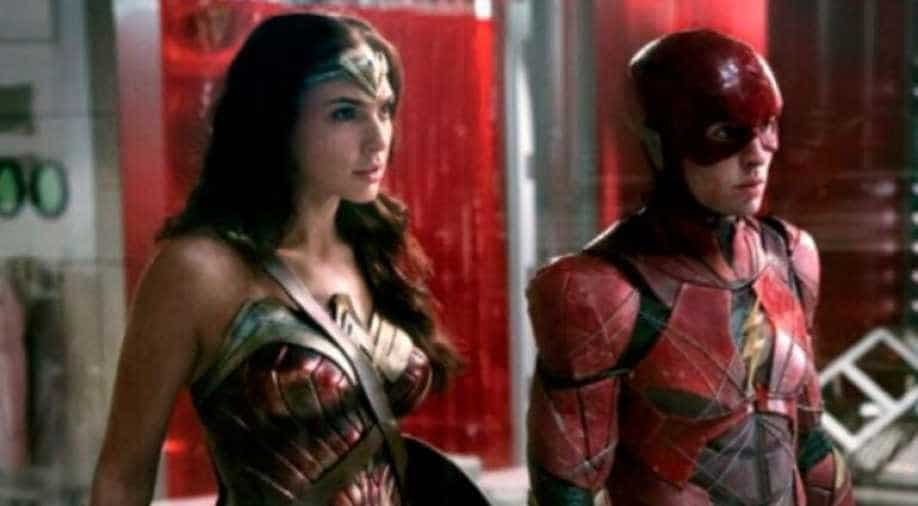 Gal Gadot and Ezra Miller as Wonder Woman and The Flash in a still from 'Justice League' Photograph:( Twitter )

Gal Gadot reportedly refused to shoot a comic scene in 'Justice League' in which The Flash lands on her body in the middle of an intense fight sequence.

Ever since actor Ray Fisher called out the abusive nature of filmmaker Joss Whedon on the sets of 'Justice League', more reports of the filmmaker's questionable behaviour are coming into light.

Fisher, in a recent interview, stated that Whedon's on-set behaviour was ‘gross, abusive, unprofessional and completely unacceptable.’ Recent reports state that even Gal Gadot, who played Wonder Woman in the film, was unhappy with his behaviour.

Fisher, who played Cyborg in the movie, in a recent tweet slammed Whedon’s behaviour. “Joss Wheadon’s on-set treatment of the cast and crew of Justice League was gross, abusive, unprofessional, and completely unacceptable. He was enabled, in many ways, by Geoff Johns and Jon Berg. Accountability>Entertainment,” Fisher wrote.

Corroborating Fisher's tweet, photographer Clay Enos, who has collaborated with Snyder on several projects, tweeted, “I heard the same thing.”

Now a report has claimed that Gal Gadot refused to shoot a comic scene in which The Flash lands on her body in the middle of an intense fight sequence. Gadot felt that the scene sexualised Wonder Woman. Whedon, though persisted and when Gadot refused, he brought a body double to shoot the scene instead. Actor Ezra Miller played The Flash in the superhero film.

I doubt we’ll ever get specifics from Ray Fisher re Joss Whedon, but here’s one I was the first to report:

Gal Gadot didn’t want to film this scene, so Whedon did it w/ a stunt double. That’s why you can’t see her face.#DC #DCEU pic.twitter.com/efliLlY2EW

Whedon was brought in as a last-minute replacement for original director Zack Snyder after Snyder exited the film because of a family tragedy.

Whedon has in the past directed Marvel’s 'The Avengers' and 'Avengers: Age of Ultron'.

One fan on Twitter was quick to point out how the sequence was similar to the scene in 'Avengers: Age Of Ultron', where Bruce Banner lands on top of Natasha Romanoff. “The fact that he did the same exact gag in Age of Ultron just two years earlier really shows his growth as a comedy director,” the fan wrote.

Photographer Jason Laboy, who has worked with Fisher, tweeted, “Don’t forget to add that he locked her in a room and threatened her career if she didn’t do the scene. That is very important and should not be omitted.”

So far Whedon has refused to comment on the controversy. Meanwhile, producer Jon Berg has said that Fisher complained because he was made to say catchphrases that he didn't want to. But the controversy has led to a major backlash on the internet. Fans have now demanded the release of Zack Snyder's version of 'Justice League' which will be available on HBO Max in May 2021.