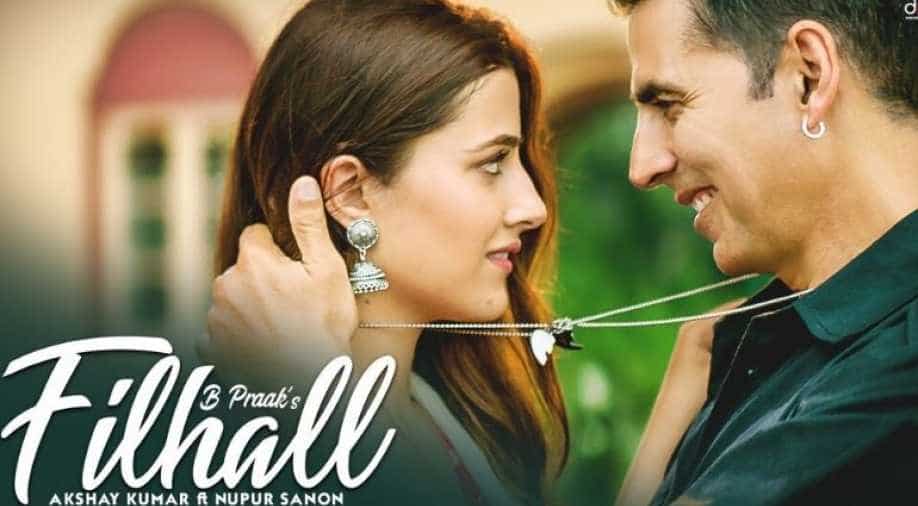 The beautiful song has been crooned by B Praak, while Jaani was the composer and lyricist.

After impressing fans with his acting skills, Bollywood's 'Khiladi' Akshay Kumar, who is set to debut into music, released the soulful track 'Filhaal' on Saturday.

The soft melody, which stars Kriti Sanon's younger sister Nupur, is sure to touch the right emotional strings in you. The song shows Akshay and Nupur caught in a painful love story. The eloquent track starts with Akshay as a doctor when he hears of a patient arriving at the emergency ward.

He later finds out that it is his ex-lover Nupur, who meets with an accident and is lying with blood gushing out of her body. As soon as Akshay sees his separated love lying unconscious, he renumerates the time spent with his lady love and under what circumstances they had to separate.T

Taking a 360-degree turn, the video showcases the separation of the love birds, which will leave you emotional. Nupur in the song can be seen donning simple yet gorgeous kurta as she romances Akshay.

The two share great chemistry as the love story progresses, but ends up separated because of family issues. In the song, fans can also catch a glimpse of singer Ammy Virk, who plays the role of Nupur's lover and television star Asmita Sood, who plays Akshay's wife.

The beautiful song has been crooned by B Praak, while Jaani was the composer and lyricist. Akshay has a list of films in the pipeline including 'Good Newws', 'Laxmi Bomb', 'Sooryavanshi'.