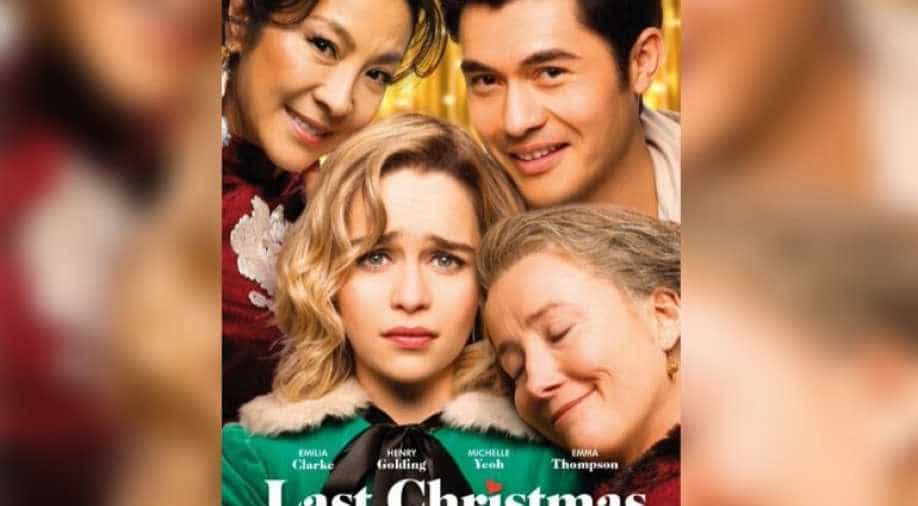 Watching the 'Mother of Dragons' Emilia Clarke in a romantic comedy would be nothing less than a visual treat and now fans can catch her upcoming outing 'Last Christmas' in less than a week as the film is arriving early on November 8.

The film which was earlier scheduled to hit big screens on November 15, stars 'Crazy Rich Asians' actor Henry Golding and Emma Thompson as well. Inspired by 1984's Wham! holiday classic, the movie will feature unreleased music from the late legendary Grammy-winning artiste George Michael and has been produced by Feig and Jessie Henderson for BAFTA-winner David Livingstone and Thompson.

Sharing the news on Twitter, film critic Taran Adarsh also put out the poster of the film featuring a slightly frowning Clarke with Goldin, Michelle Yeoh and Thompson happily surrounding her.

Clarke on Thursday attended the New York City premiere of her next release where she got candid about how she is greeted by fans. Whenever she meets fans, she always gets bombarded with theories on what fans "would have liked to have happened in season eight as opposed to what happened so there's a lot of that," the 'GOT' actor had told the news agency. Watch the movie trailer here

Some theories, she said, are "fascinating, really, truly... mind-blowingly brilliant ". The 33-year-old star also shared her thoughts on fans naming their children after the 'GOT' character, Daenerys or Khalessi.

"A lot of people did Khaleesi and Daenerys by the time someone's called their child Khaleesi or Daenerys, they're like four when season eight happened and so they no longer become the character but rather the child that they are... so that's good. They create their own identity," she said.