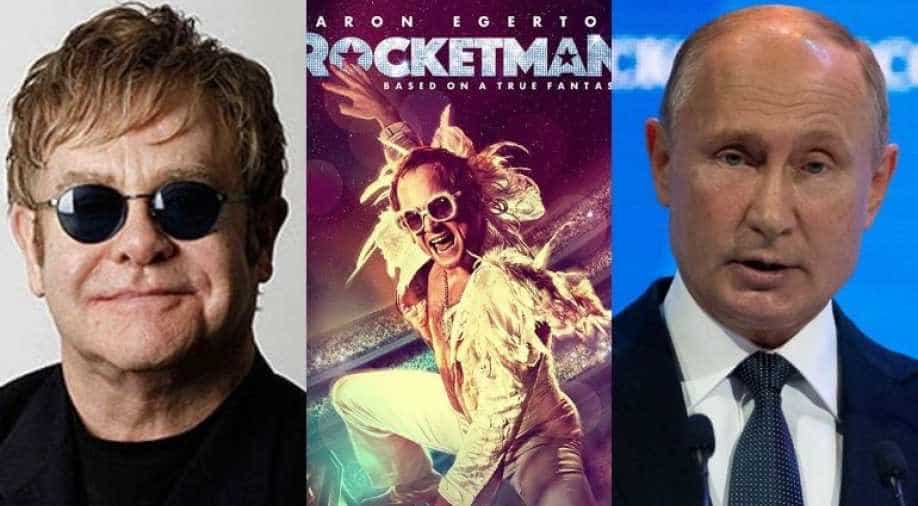 The Russian distributors removed the intimate scenes between men from the musical biopic `Rocketman` screened in Russia on May 30.

John accused Putin of `hypocrisy` when it comes to LGBTQ rights, reported Variety.

"Dear President Putin, I was deeply upset when I read your recent interview in the Financial Times. I strongly disagree with your view that pursuing policies that embrace multicultural and sexual diversity are obsolete in our societies," wrote John.

Putin answered questions on various topics such as the Syrian civil war, North Korean disarmament and the state of liberalism. "The liberal idea has become obsolete. It has come into conflict with the interests of the overwhelming majority of the population," said Putin in the interview.

"Traditional values are more stable and more important for millions of people than this liberal idea," he claimed.

Putin also responded to the anti-LGBTQ policies. "I am not trying to insult anyone because we have been condemned for our alleged homophobia. But we have no problem with LGBT persons. God forbid, let them live as they wish," he said.

"But some things do appear excessive to us. They claim now that children can play five or six gender roles," he added.

"Let everyone be happy, we have no problem with that. But this must not be allowed to overshadow the culture, traditions and traditional family values of millions of people making up the core population," he emphasised.

John wrote in his response, "I find duplicity in your comment that you want LGBT people to `be happy` and that `we have no problem in that.` Yet Russian distributors chose to heavily censor my film `Rocketman` by removing all references to my finding true happiness through my 25-year relationship with David and the raising of my two beautiful sons. This feels like hypocrisy to me."

"I am proud to live in a part of the world where our governments have evolved to recognise the universal human right to love whoever we want. And I`m truly grateful for the advancement in government policies that have legally supported and allowed my marriage to David. This has brought us both tremendous comfort and happiness," John ended the letter.

Directed by Dexter Fletcher, the film`s screenplay has been penned by Lee Hall. Elton and his husband David have produced the film along with Lawrence Bender, Adam Bohling, David Reid, and Matthew Vaughn.

The film was released on May 31.