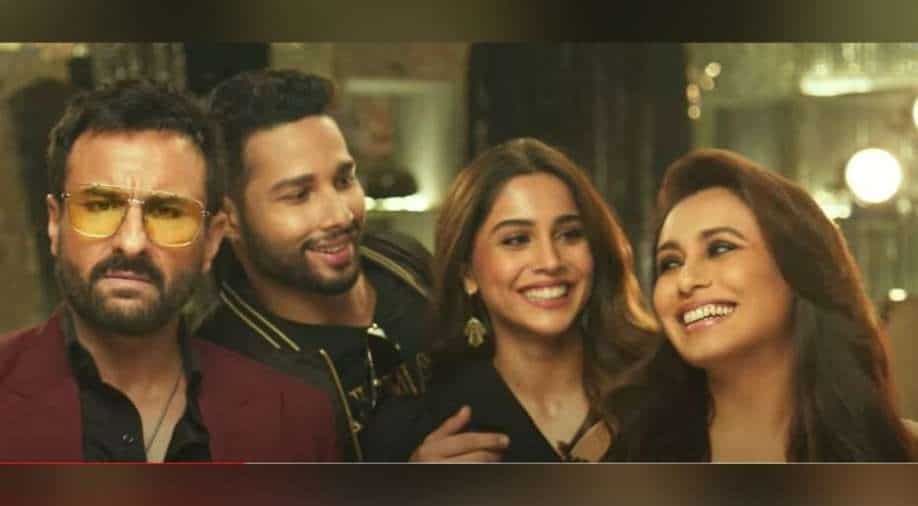 The popular on-screen pair of 'Hum Tum'- Saif Ali Khan and Rani Mukerji are reuniting on the screen once again, this time as Bunty and Babli.

The popular on-screen pair of 'Hum Tum'- Saif Ali Khan and Rani Mukerji are reuniting on the screen once again, this time as Bunty and Babli.

Yash Raj films shared the first teaser of 'Bunty Aur Babli 2' featuring the two Bollywood stars and Gen-Z actors Siddhant Chaturvedi and Sharvari on Friday. The teasers have the two pairs trolling each other.

The teaser video begins with Rani and Saif all dressed up to shoot for the film`s promotional video. Rani asks Saif, "Saifu, after how long we are working together" and he replies, "it's been 12 years."

To which, she said that she extremely missed working with him. After a few seconds, Siddhant and debutant Sharvari come into the video and claim to be the new Bunty and Babli. While the OGs feel that the new con artists are mere usurpers, the new con couple feels that they are cooler and smarter than the OGs.

This clash between the two pairs left netizens in splits. Reacting to the teaser, an Instagram user commented, "Hahhahha. Movie looks super fun."

"Oh My God! Can't wait to see Saif and Rani on screen together. They will surely beat the new artists," another user wrote.

According to Saif, 'Bunty Aur Babli 2' is nothing less than a game of cat and mouse."Bunty Aur Babli 2 is a game of cat and mouse between the OG con couple and the New con couple trying to prove that they are better than what the originals were in their prime. This will spark the rivalry and it's just hilarious because of how intelligently the script has been written to show this madness," he said.

Talking more about the video, Rani said, "The video is a true reflection of what the film has to offer to audiences which is non-stop entertainment and non-stop comedy. Though in the unit, we play ourselves and not the characters in the film, it has been smartly written with trolling humour as Saif and I go after Siddhant and Sharvari and vice versa."

Siddhant feels the particular teaser is the true reflection of the film."It's a war between the OG's and the new Bunty Babli and it has been brilliantly captured in the video. Both parties stake the claim to be intellectually superior. While the OGs feel that the New con artists are mere usurpers, the new con couple feels that they are way too cool and smart than the OGs! That`s the premise of the film and you will see us going after each other right from this video and all through the entire marketing campaign," he shared.