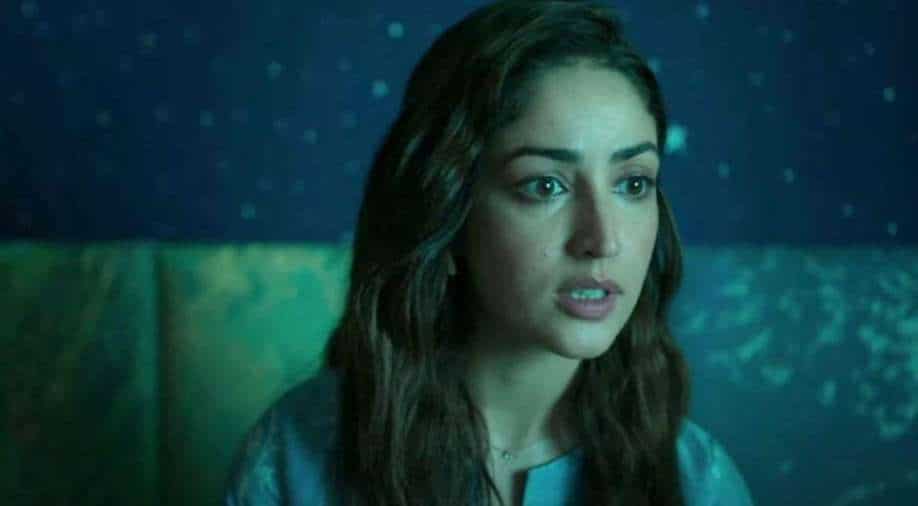 Yami Gautam in a still from 'A Thursday' Photograph:( Twitter )

Yami Gautam is the uncanny hero of the film. A story like this has to be well written and well enacted. Writers Ashley Lobo and Khambata deliver a taut screenplay and Gautam plays the mysterious Naina with absolute ease.

A sign of a good thriller is how unpredictable it is and how well and long it keeps its audience engaged with it through its run time. Filmmaker Behzad Khambata's film 'A Thursday' headlined by Yami Gautam Dhar ticks most of the boxes of what makes a good thriller.

Gautam plays Naina, a pre-primary school teacher, who one Thursday decides to take her 16 students hostage. She calls up the local police station to announce that if her demands are not met, she would kill her hostages- which includes a driver of a student and the school's helper- on an hourly basis.

The Police, led by a visibly pregnant Catherine Alvarez (Neha Dhupia) arrive at the scene soon enough but Naina demands to first speak to Javed Khan (Atul Kulkarni) who is Catherin's subordinate. She then demands a lump sum money to be transferred to her account in exchange for a student. Things go awry soon enough when she shoots at one of her hostages live on social media, much to the horror of the cops, the frightened parents who have gathered outside and the nation at large who are watching the drama unfold live on new channels. Naina eventually wants to speak to the PM of the country (Dimple Kapadia) who takes time to understand the seriousness of the situation.

Set in a time when 24/7 News Channels and social media make the world accessible to one all, the film is a sequel of sorts to Neeraj Pandey's brilliant 'A Wednesday' where a common man-made the Mumbai Police run amok to find bombs in the city in order to send across a powerful message. Thematically, 'A Thursday' is also a vigilante drama, and adapts to the current pace of live TV and social media well as Naina unfolds her demands one by one on social media.

To its credit, 'A Thursday' keeps you mostly gripped throughout its 2 hours run time. Why has she held the innocent children hostage, why does she only want to speak to Javed Khan, why does she want an audience with PM- are questions that plague your mind while watching thereby keeping you hooked to the film.

It wastes almost no time in deep diving into the plot with Naina, as the popular teacher of the playschool, turning deeply disturbing in a matter of hours.

Gautam is the uncanny hero of the film. A story like this has to be well written and well enacted. Writers Ashley Lobo and Khambata deliver a taut screenplay and Gautam plays the mysterious Naina with absolute ease. One doesn't associate such characters to Gautam usually and that's where she triumphs. As Naina, a warm person suddenly turns eerily vengeful, Gautam goes all out but never overdoing her part. She is able to strike a balance.

Atul Kulkarni, who plays cop Javed Khan is good too although his character lacks the depth. He character is a mansplainer of sorts, telling his superior- a woman- how to do her job well. Dhupia, with limited time on screen also delivers a credible performance even though her screen time is limited.

Performances of Dimple Kapadia as the PM of the country and Kalyanee Mulay as the help who is held hostage are also worthy of praise.

The film though takes copious liberty in terms of how the drama unfolds and how Naina's demands are met by the police. It also delivers a message which is deeply polarizing and has been a topic of debate for years now. Of course, in cinema judgements and laws are delivered quicker than in real life. Nevertheless, 'A Thursday' by the end may not leave you very convinced (or deeply convinced) but credit should be given for once again starting to conversation.

'A Thursday' is steaming on Disney+Hotstar.