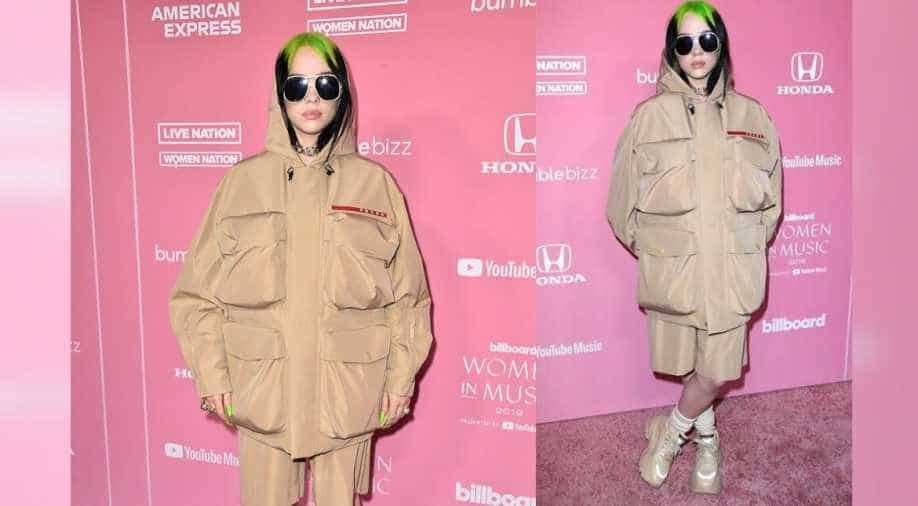 It was a night of celebration as Billie Eilish graced the red carpet of the Billboard Women In Music event. She turned quite a few heads as she came dressed in beige overalls with her iconic neon green hair and matching nails.

At the event that took place in Los Angeles, she became the Billboard’s youngest Woman of the Year Honoree. She is just 17 years old.

Billie Eilish came dressed in chunky sneakers and a Prada coat, shades and her neon green hair that stand out even from a distance. She also painted her nails to the exact colour. While accepting the award she said, “It’s really weird to be woman of the year at 17," and added, "Ariana Grande got the award that I’m getting right now a year ago, and two weeks ago I realized that’s the award I’m getting — and that really freaked me out.”

Watch @billieeilish accept the Woman of the Year Award at #BBWomenInMusic 2019 👏 pic.twitter.com/RuFLLnpwAh

She wrapped her own speech by quoting Taylor Swift's that opened the night in which Swift noted how we have to take care of the young women eager and starting to build a career — saying with open arms: “You took care of me.”

The singer who has been making a buzz with her songs, especially ‘Bad Guy’, was joined by her brother and frequent collaborator Finneas O'Connell for the event.

As for Billie Eilish, the singer was recently also in the news as it was released that Apple’s streaming platform has bought the rights for her yet-to-release documentary for a staggering amount, $25million.